Korean Grand Prix 2013: Sebastian Vettel operns a 77-point lead in the championship – an advantage of more than three victories 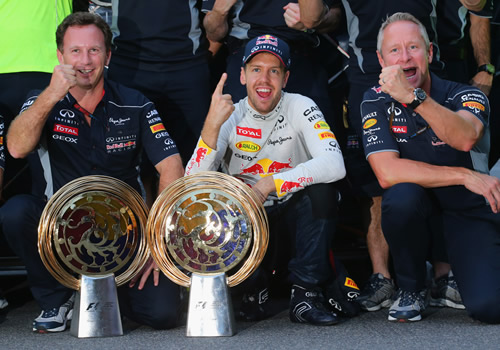 When the Formula 1 season returned from its summer break at the back end of August, very few would have predicted what was to come in the following four races.

Just over a month ago, Sebastian Vettel held a comfortable lead – but there were encouraging signs that his rivals behind were more than capable of taking the fight to the Red Bull juggernaut.

Sadly, for both Vettel’s rivals and Formula 1 itself, no such challenge has since presented itself, allowing the confident, finger-wagging German to open out a 77-point lead in the championship – an advantage of more than three victories – and the chance to wrap up a fourth straight title in Suzuka next weekend and become the only the third driver to achieve such a feat at the age of just 26 (Michael Schumacher achieved this aged 32 in 2001).

Just like Belgium, Italy and Singapore before, Vettel controlled a poorly-attended Korean Grand Prix in the swamps of Yeongam from the start, getting off the line supremely, not allowing anyone behind him to get within an inch, and open out enough of a gap by lap two to stop his chaser in second from using his DRS.

Two safety car appearances gave those behind hope, but the manner in which Vettel raced off into the distance at the race’s resumption following each period was frightening, and simply typified the German’s dominance of the 2013 season.

Behind, Lewis Hamilton said what the masses were thinking after finishing a distant fifth: “Fernando and I are of a higher calibre than that. We should be further ahead fighting with the world champions at the front and with Sebastian.”

Few would disagree. In Korea, just like the races before, the closest both Hamilton and Alonso could get to Vettel were in either qualifying, or by virtue of the safety car making an appearance. While Hamilton will be disappointed in the way in which his title challenge abruptly evaporated, it is easy to forget that Hamilton joined Mercedes with the aim of being a title contender in 2014.

It is Alonso who should rightfully feel more aggrieved. For the fourth straight year at Ferrari, he has been at the forefront of a title challenge, but still lacking a car of an overall performance to come close to overhauling the Newey-designed Red Bull over the course of a season.

It’s been four years that both Ferrari and Luca de Montezemelo never envisaged, but there is still plenty of time to right the wrongs; you only have to remember that it took Michael Schumacher four barren seasons before a first world title for Ferrari 13 years ago.

Now heading to Suzuka with the first chance of being able to secure an unprecedented fourth-straight title at a track in which he’s enjoyed recent success, it has now become a matter of when the German will officially secure the title before the season’s final race. Should the German win in Japan and Fernando Alonso finish no higher than eight, the championship will be his. As for the others behind, they can only delay the inevitable for a further two weeks at the very least.

Driver of the weekend: While Sebastian Vettel remained imperious throughout the course of the weekend, but there were plenty of drivers who made an impression behind. While Romain Grosjean produced an excellent weekend of consistency with Lotus still undecided on whether to retain their driver, few can deny the undoubted star of the weekend was another German, Nico Hulkenberg, who in securing a superb fourth place once again underlined his talent at the wheel of a midfield car, and once again put his hand up to teams above him that he deserves a seat higher up the grid for 2014. If he can close out the season with further performances like that in Yeongam, then team’s undecided on their line-ups for 2014 would be foolish to pass up on such an opportunity.

Good weekend for: Lotus, for securing a double podium to finally pick themselves up once more after a disappointing return from the summer break; Sergio Perez, who despite a tyre blow out showed some promise despite McLaren continuing to stall over offering him a drive for next season.

Bad weekend for: Mercedes, who once again couldn’t transform an excellent qualifying into a competitive race; Paul di Resta, who in suffering a fourth retirement through driver error could find himself sweating over a seat for 2014, and Mark Webber, who’s car unfortunately caught fire after a collision with Adrian Sutil despite being on course for a podium finish, and which kept up the Aussie’s unfortunate luck in his final season.