Korean Grand Prix 2013: Red Bull's Sebastian Vettel dominates race to put himself on the brink of a fourth world title 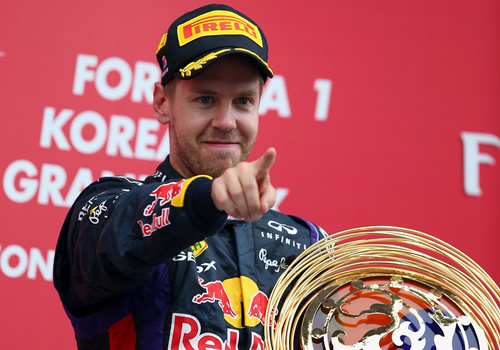 Sebastian Vettel drove a confident race to bring home victory at the Korean Grand Prix at Yeongam and increase his chance of securing a fourth consecutive world title.

The German lead from start to finish in an action-packed race and will take the title in Japan next week if he can secure a fifth consecutive win and Fernando Alonso comes lower than eighth.

Both Lotus drivers joined Vettel on the podium, with Kimi Raikkonen finishing in front of his team-mate Romain Grosjean.

Hamilton had passed Hulkenberg on lap 48 but the Sauber driver managed to regain his position with seven laps to go.

There was drama from lap one as five cars abreast approached turn three which saw Ferrari’s Felipe Massa spin, causing damage to Adrian Sutil and Jenson Button, who both had to pit for new front wings.

By lap 13 Vettel had pulled away from the pack and was leading by 2.7 seconds.

There was disappointment for Force India’s Paul Di Resta as he spun off the track on lap 26 and retired for the fourth race in a row.

Nico Rosberg’s race was ruined on lap 28 as his Mercedes’ front nose became loose, causing sparks to fly off his car.

Fortunately, he was able to get his car back to the pits safety but his pit crew struggled to replace the nose, resulting in a 22.6 second stop.

Vettel had created a significant lead but the final 20 laps saw the field close up following two safety-car periods.

There was confusion as a slow-moving unmarked vehicle joined the track, which was later explained to have been sent by Korean Fire Chiefs to aid Marshals in putting out Webber’s car.

Vettel seemed unaffected by the safety car and was able to pull away on the restart, while Grosjean was urged by Lotus to race his team-mate, Raikkonen.

However, Grosjean was unable to catch up to the Finn and had to settle for third place.