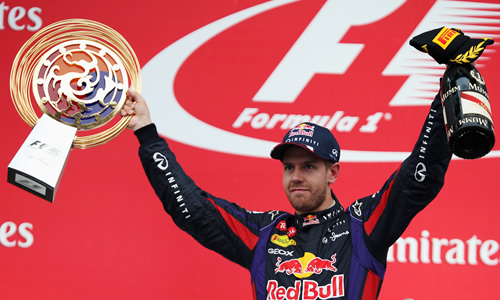 Sebastian Vettel could not hide his delight after winning an action-filled Korean Grand Prix at Yeongam which saw two safety car periods.

The German looked relieved on the podium as for the first time in several races the crowd did not boo the current world champion.

“It’s not great getting stuck behind the safety car but really pleased with the result and great by the team,” said Vettel.

He added that the team had some concern over his front right tyre but he was fortunate to maintain his lead over Lotus who he felt had better tyres.

“I am really enjoying things at the moment, we have a great team and we are having a great time,” he added.

Kimi Raikkonen was pleased to be on the podium, finishing second, which sees the Finn edge above Lewis Hamilton in the championship by six points.

The Finn was critical of his Lotus’ performance but insisted that the safety car had no effect on the race result.

“It was OK,” said Raikkonen. “I think I lost a place on the first straight. The car has been understeering this weekend and was doing it today and I had to look after my front tyres.

“I got stuck in traffic but even without the safety car we could have finished on the podium.”

Romain Grojean was ecstatic to finish in third place and make a return to the podium – the Frenchman was last on the podium in July when he took third at the German Grand Prix.

Grojean said: “It was pretty good fun, we had a good start, it was hard but it was good to be very close to the Red Bull, it didn’t get too far away.

“I made a small mistake and Kimi overtook me but it was my mistake. But we are back on the podium so it is all good.”

The world championship could be claimed by Vettel next Sunday in Japan at Suzuka if the German wins and Fernando Alonso finishes no higher than ninth place.

Vettel admitted that he was looking forward to the race and while optimistic for a good result, did not comment on the championship.

“I think it is the best track in the world, the fans are completely crazy in a good way and I am really looking forward to it, it will be a great race,” he concluded.