Korean Grand Prix 2013: Sebastian Vettel is all smiles as he secures his fourth consecutive pole at Yeongam 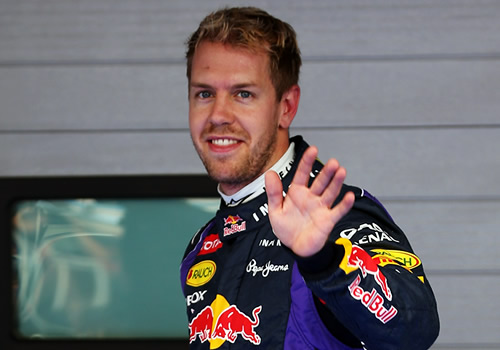 Sebastian Vettel was all smiles as he secured his fourth consecutive pole for the Korean Grand Prix at Yeongam – the 42nd of his career.

The German set an early benchmark and his rivals were unable to topple the World Champion who was 0.218 seconds faster than Lewis Hamilton.

Vettel said: “I think it was fairly close. We had a very good lap on my first attempt. I knew it would be tricky for me to beat that time.

“I tried but I caught Kimi on warm up lap and on the second run. I was bit too close and not ideal. Fortunately, the first lap was good enough.”

He praised the Mercedes for being strong saying that it was a tight battle between the teams but felt that Red Bull got the balance right this weekend.

Lewis Hamilton hailed his team and is feeling optimistic ahead of Sunday’s race, saying that he was prepared to battle for a good race result.

“You’ve always got to be looking ahead, but we did as good a job as we could. We got the most out of the car,” said Hamilton.

“It has been a good qualifying for us and hopefully tomorrow we will be able to fight with them [the Red Bulls]. There’s threats all around but I’m just looking forward.”

Red Bull’s Mark Webber, who qualified third but will start from 13th after his penalty from Singapore, was pleased with his performance.

He said: “I’m pretty happy with qualifying. I could be two positions better off but will start in 13th because of the penalty.

“It was a tight qualifying session. We wanted to improve the car. The conditions will be different again tomorrow and we will see how it goes.”

The changing weather may be of some concern to teams after a typhoon had been due to hit the area, however Vettel remains unconcerned about the potential for rain.

He said: “It’s not a disaster if it starts to rain, we have rain tyres in the garage. They were talking about heavy winds.

“If we get some rain from the typhoon, it doesn’t matter. The most important thing is that we did the job today.”