Korean Grand Prix 2013: What lessons did we learn as Sebastian Vettel took another step towards a fourth straight world title? 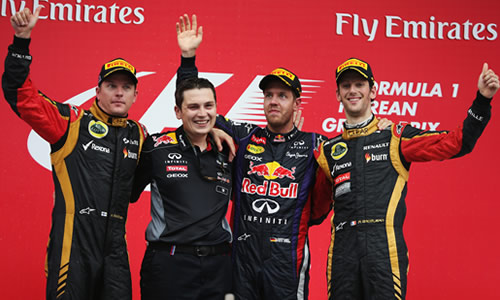 Without a doubt, Sauber’s Nico Hulkenberg was not just the surprise of the day but also the driver of the day. He drove the race of his life, fending off Lewis Hamilton during the latter parts of the race which left the Brit asking his team for “any suggestions” to get passed. It would be criminal if Hulkenburg is not given a drive for next year but today’s result has no doubt opened the eyes of some of the team bosses. With McLaren still to confirm Sergio Perez for next year, could Hulkenburg snatch his seat, or could there be a potential move to Lotus?

The marshals do a fantastic job on the race track, however today reaction seemed slow when Mark Webber’s Red Bull burst into flames. Not only did it take a significant amount of time for the fire to be put out, but there was further confusion when Korean officials sent a vehicle on the track to help. The decision no doubt will infuriate Charlie Whiting as the slow-moving marshal’s jeep replaced the safety car at the front of the pack which caused confusion amongst drivers.

Tyres are still a problem

As soon as Sergio Perez’s tyre burst, alarm bells must have started to ring around the paddock. Fernando Alonso had already spoken out against Pirelli after qualifying, criticising the tyres for being too fragile which left drivers unable to push to the limit. Red Bull’s Mark Webber has since spoken out against the Italian manufacturer after Perez’s tyre failure, which caused the Australian a puncture. He said: “That is how it is. The drivers aren’t super important – it is what other people want, the tyres are wearing a lot and they also explode a bit – but that is for Pirelli to sort out.” Webber took it a step further when he claimed that Pirelli would most likely refuse to accept responsibility for the Perez incident. “Pirelli will put the puncture of Perez down to a lock-up but the reason the drivers are locking up is because there’s no tread left.” said Webber.