Picture: Is this Arsenal’s new Puma home kit for next season? 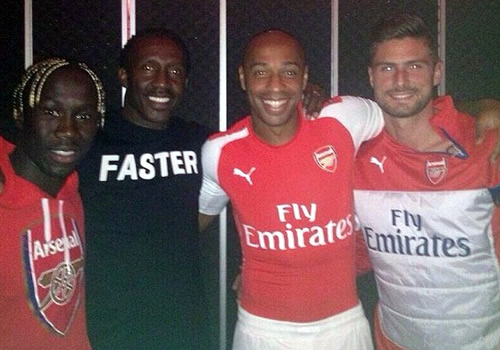 Arsenal’s Puma kit for next season appears to have been leaked after former British athlete Linford Christie tweeted a picture of Thierry Henry donning a red and white Gunners shirt.

Christie posted a picture of himself with fellow Puma ambassador and Arsenal record goal-scorer Henry wearing the shirt, with striker Olivier Giroud and defender Bacary Sagna also in the photograph.

Former sprinter Christie quickly deleted the photograph from his Twitter account but it was up long enough to be seen by hundreds of users.

Puma secured a £30m deal with the north London club earlier this year, making it the most lucrative kit contract in British football, starting from next season.

The deal marks the end of Arsenal’s 20-year association with Nike, whose deal was worth £55m over seven years.