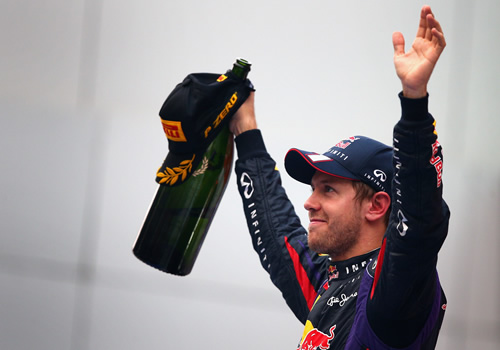 Sebastian Vettel admitted he was speechless after securing his fourth consecutive world drivers’ title in India.

“I don’t know what to say, I crossed the line and I was just empty.

“You want to think of something to say and I just can’t. It has been an amazing season, the spirit in the team is great and it is a pleasure to jump in the car and drive.

“When I started to race, Formula 1 seemed so far away but there are so many people I have to thank along the way from karting to here.

“I was taught so many things and I have always tried to listen but to come out on top of this incredibly talented field is amazing.

“I am not old yet but I am getting older and maybe I am not grasping it yet. Maybe in ten years time I will look back and realise the enormity.”

Vettel’s domination of his sport and this season doesn’t get the recognition it deserves, according to Adrian Newey – the technical visionary behind Red Bull’s fourth straight constructors title, which puts them level with fabled names Ferrari and McLaren.

“His feet are on the ground, he is just an ordinary kid who has not lost sight of who he is despite the success he has had,” he said.

“He is very humble, very intelligent, he has that process like all the greats of being able to drive and be conscious of what is going on around him all the time. It has been a real pleasure to work with him.”

Ferrari’s Fernando Alonso, Vettel’s nearest title rival, was quick to praise the German after a disappointing race in India, which started with a first lap collision that spoiled his strategy, meaning he came home 11th.

“It was a bit uphill after the start and the steering wheel felt really heavy throughout the race – it wasn’t a good weekend and we need to put that right before Abu Dhabi,” he said.

“Sebastian and Red Bull have been very dominant and deserve to be champions. Our goal now is to pass Mercedes in the constructors’ championship and then start thinking about next year and making life a bit more difficult for Seb and Red Bull.”