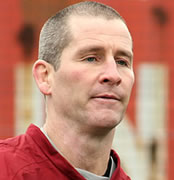 England will have confirmed their 2014 autumn international fixtures and will welcome New Zealand, South Africa, Samoa and Australia to Twickenham, less than a year before hosting the World Cup.

This autumn, Stuart Lancaster’s side face the Wallabies, Argentina and the All Blacks before looking to regain the Six Nations title.

A year ago, England beat Fiji before suffering defeats to Australia and South Africa although they restored some pride with an historic 38-21 victory over New Zealand – only their seventh win in 35 matches against the world champions.

And Lancaster believes that hosting the top three southern hemisphere sides, as well the ever-improving Samoans, will be the perfect preparation for the 2015 Rugby World Cup.

Lancaster said: “To be able to take on these teams in successive weeks is ideal preparation for the World Cup and will tell us a lot about where we are one year out.

“All four are tough opponents and we are looking forward to the challenge.”

New Zealand are the reigning world champions and ranked No.1 in the world while South Africa and Australia are ranked second and fourth in the world respectively, with Samoa seventh.

Ashes 2013-14: Australia’s Clarke determined to be fit for Gabba Test