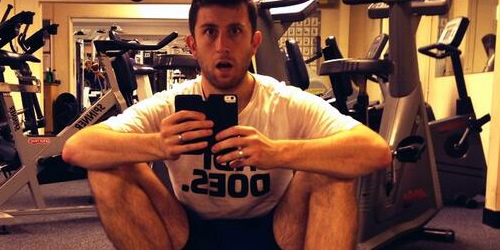 Daryl Selby provided the shock of the last 16 on Wednesday as he beat former world No1 Karim Darwish in a thrilling five games.

Interviewed by the court just after, Selby said: “It’s my first quarter-finals of the World Championship and to do it in front of of a home crowd is great.

“So thanks, you guys. When it was close at the end, I think that helped because I did not have much left in the tank.

“I lost 3-1 against him last year, so maybe this is a bit of revenge.”

He added: “To get a win like that, I’m very proud, and emotional.”

After the first, it seemed it might be quite a straightforward victory for Darwish – at World No5, nine places higher than Selby – as he controlled the rallies, and the Briton only picked up a few points on the counter-attack.

But Selby showed “fight” to get back into it, winning the second 11-8. And both players peaked in the third.

At 9-8 to the home favourite, Selby picked up a dubious ball and Darwish, only half playing it, lost the point, then looked incredulously at the umpires when they did not call it down.

After his protestations, they decided they weren’t sure and played a let (not a common occurrence).

Darwish got a shut-out position to drive a winner in the replayed point, then Selby made an error after a ferocious volley rally to make it 10-9 to his higher-ranked opponent.

In the next three points, Selby hit a very tight backhand and volleyed away all that Darwish could muster with the reply, got a little lucky in using his review to have his opponent’s stroke overruled, then won it with a good squeeze.

Those spiritually inclined could say karma was at play in the fourth, as three borderline calls in close succession went against Selby from 4-5.

First, from the front, he hit a decent straight backhand lob, but Darwish called and the referees deemed Selby had not sufficiently cleared, and upheld the stroke decision after the Essex man’s review.

Then there was a very similar case – probably slightly less of a stroke but again given, and Selby did not have the review remaining.

Such decisions are borderline and a slight bone of contention in squash – dependent on where the referee thinks the ball would be played and split-second consideration of angles – but many refs (and this observer) would haven given just a let for both.

The fifth seed certainly had enough space to safely play down the line.

Then Selby guessed right on a Darwish drive but was only given a let, claiming, with good reason, it should either be a no let, if he was not there to play it, or a stroke, as Egyptian was right in front of him.

However, Darwish did play some world-class squash and took the game.

But Selby held his nerve in the fifth – another tense, high-quality game – and credited the win, partly, to his choice of shirt.

He said: “Us squash players are a weird bunch and I saw James [Willstrop] win in all blue earlier. I was going to wear orange but I changed my mind to blue.

“We are weird people, and that’s the way we think.”

“Daryl played brilliantly today so I really congratulate him – but unfortunately, he has to play me in the next round,” he said.