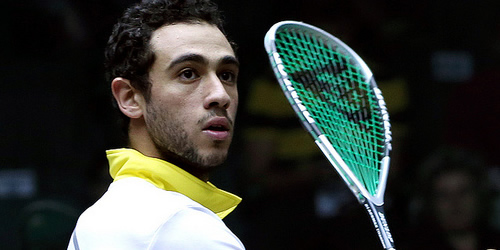 Ramy Ashour will be glad of a rather more comfortable second round game here in Manchester, after nearly finding himself one game away from exiting the competition at the first hurdle yesterday.

He eased to a 11-6, 11-6, 11-4 victory against compatriot Fares Dessouki in just 23 minutes, never looking rushed and the game often looking like an exhibition for the Egyptian.

He has this unique ability to make volleys few, if any, others could, and return with interest – deep the back court, as here, or very tight to the front wall – those that his peers could only hope to scramble back.

Peter Barker suffered some horrid luck, as a calf injury forced him to bow out from a winning position.

The Essex player, seeded seventh, would have had high hopes for the tournament given his form this year, which has seen him beat Nick Matthew to reach the final of the Canary Wharf Squash Classic and win his fourth Colombian Open, beating Omar Mosaad in the final.

And he had won the first two games comfortably here – his opponent, Henrik Mustonen, moving fairly well but having little to really hurt Barker with.

So the frustation etched on his face, when he pulled up sharply running for a front-court ball at 9-6 down in the third, was understandable.

After letting out a big shout, he stood still and silent for around 20 seconds before hobbling off for the designated three-minute injury break.

On returning, he hit an ambitious smash nick attempt – the only really viable option in his state – into the tin, and had to retire.

The Finn, obviously pleased to go through even if in “not the nicest way” to do so, will face Indian Saurav Ghosal, who beat the higher-ranked Alister Walker in four, with Mustonen expecting a fast-paced game between two players with impressive retrieval.

The Egyptian displayed his vast array of flicks and tricks to outfox the Frenchman, but looked far from his past glories at times so it will be interesting to see how he fares against more slightly stronger opposition.

And his next match against Miguel Rodriguez, who beat Leo Au in three, promises fireworks – Shabana’s tricks against the Colombian’s legendary movement of super-quick, almost crab-like steps and outrageous full-length dives.

The opposition after that will be Nick Matthew or Omar Mosaad, both of whom won fairly comfortably in straight sets.

There were no major shocks in the lower half of the draw, which will please James Willstrop who has got other things on his mind at the moment, with his partner one week overdue with their first child.

Thankfully for the pair, she is former former World No.1 Vanessa Atkinson, so understands the demands on his time and his desire to win.

He said: “It’s a decision I made with Vanessa that I would play; she is not on her own which makes it easier. I’m not sure exactly how we will react when the baby comes.

“If it’s in the middle of the night, what should I do? We’ll play it by ear, really.

“At the moment I try and stay focused for the hour or two during the match and around it – and the rest of the day it’s all about Vanessa.

“I guess it puts everything in perspective and in the big scale of things, squash is not that important.”

Big-hitters Simon Rosner and Mohamed Elshorbagy will also meet in the last 16 after recording straight-games victories.

Elshorbagy wasn’t posed much difficulty by Omar Abdel Aziz, but the story was nearly very different for Rosner, who took just under an hour – very long for three games – to see off his tenacious opponent, Abdullah Al Mezayen.

He will play Darly Selby, who won a tense 75-minute match against tall South African Steve Coppinger, who got very frustated with the officials.

It probably had a fair bit to do with Selby too, who must have seemed like a fly Coppinger couldn’t swat – regularly retrieving balls he had no real right to get, and coming back from 9-7 down to take the crucial 2nd game 12-10.

Coppinger played some impressive squash to take the third 11-9, but seemed spent by his efforts, as he lost the fourth 11-3.