ATP World Tour Finals 2013: Jamie Murray and John Peers still have a chance of qualifying for the season-ending event 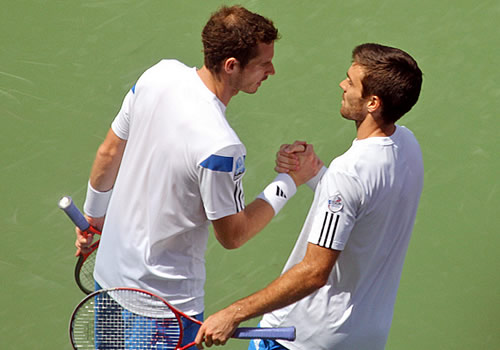 The withdrawal of Andy Murray from this year’s ATP World Tour Finals in London was far from unexpected after his decision to undergo back surgery last month.

Disappointing as it is that the two-time Grand Slam champion and Olympic gold medallist is unable to take up his place at the ATP tour finale in his home city—his first appearance in the UK since this year’s Wimbledon victory—a pain-free return to tennis next season should see still more Major successes.

But it is not all doom and gloom on the Murray front, nor for British fans, at the WTFs next month, for doubles tennis has been going from strength to strength over the last couple of years.

Many will recall the summer of 2012 not just for Murray’s gold in the Olympic singles but, just a month before, a Wimbledon doubles title for Jonathan Marray with Dane Frederik Nielsen. The wait for a men’s doubles champion at the All England Club had been as long as the wait for a men’s singles champion. Both dated back to 1936—but it was Marray who got the win first.

However the previous Briton, man or woman, to win a Wimbledon title was another Murray, Jamie: He won the mixed doubles in 2007 with Jelena Jankovic. And it is the elder Murray—by 15 months—who is very much in the race for London this season after a resurgent doubles season.

As well as his Grand Slam success in 2007, Jamie Murray won three men’s doubles titles with Eric Butorac that year, but he subsequently struggled to find such a consistent partnership—though he teamed with his brother to win in Valencia in 2010 and Tokyo in 2011.

He opened 2013 with Colin Fleming, whose regular partner, Ross Hutchins, was sidelined with Hodgkins lymphoma, but both Fleming and Murray then settled with other partners: Fleming with Marray—though Fleming’s first Masters final came with Andy Murray in Montreal—and Jamie Murray with a rising name on the doubles scene, John Peers.

The 25-year-old Australian had won no fewer than seven doubles Challenger titles in 2012, and reached the finals of four more. Clearly the new partnership clicked from the start: Murray and Peers have played with each other constantly since February, and the result have followed.

Their success started slowly: the Houston title in April; the Nottingham Challenger title in June; and more wins on grass with the quarters at Queen’s and semis at Eastbourne.

Next came the clay title at Gstaad at the end of July and, in their best run, the quarters at the US Open. And from this solid platform, they launched their bid for London during the Asian swing: first the title in Bangkok, then the final in Tokyo, followed by the semis in Shanghai.

This week, they are seeded No4 in Vienna, where they play for a semi-final place against a wild card pairing. If they make it, Murray and Peers are likely to meet the top seeds who have already qualified for London, Alexander Peya and Bruno Soares.

Certainly the Briton and his partner still have a lot of work to do. They are currently ranked joint 10th, though only three pairs have so far qualified. Most of the main competition is in action this week, too, except the other joint 10th pairing of Julien Benneteau and Nenad Zimonjic. Nevertheless, Murray, talking to The Independent this week, is confident about both the short and the longer term.

“People keep asking me about London. To be honest, it’s not been on my radar at all. For us to come close is a pretty big effort, considering that we haven’t played in most of the big tournaments the teams ahead of us have played.

“Now that our rankings have moved up, hopefully we can start to play more of those tournaments next year. I think next year we’ll give it a good go. If a miracle happens and we make it this year, we’ll have had a great end to the year, but for me it’s not something I’m thinking about.”

Clearly theirs has the makings of a strong team, but continuity is an important component in building doubles success, not just a mutual understanding on the tennis court but off-court too. Murray continued: “Every time you turn up at a tournament, there’s that calmness there because you’re playing with the same guy, you know what each person’s about on the court, what they’re trying to do, their strengths and weaknesses, what we need to do to perform. … It’s exciting. We’re both enjoying it. Everyone enjoys success.”

After Vienna, the duo heads to the Valencia 500 and the Paris Masters.

Another Briton, Dominic Inglot, has also built a steady partnership that is bearing fruit in 2013, with Philippine Treat Huey. They won Washington last year before reaching the Basel final. This year they also reached the US Open quarters, went on to make the finals in St Petersburg and the semis of Tokyo. They lost in the quarters of Shanghai to the Bryan brothers, but currently stand at No13 in the race.

The record-breaking Bryans, incidentally, lead the race to London with more than twice as many points as the second-placed duo, and qualified back in June for their 11th year-end appearance. In July, in taking their third Wimbledon title, they became the first team in tennis history to hold all four majors and the Olympic gold medal at the same time.

There is further British representation at joint-16 in the race, Fleming and Marray. Both men have played with four different partners this year, but since joining forces in the spring, they have reached two finals and they too made it to the US Open quarters—making a tally of four Britons among the last eight pairs.

Fleming and Marray’s Asian swing, however, has not helped their London cause, and they are not playing this week.

Andy Murray looks ahead with confidence after receiving OBE