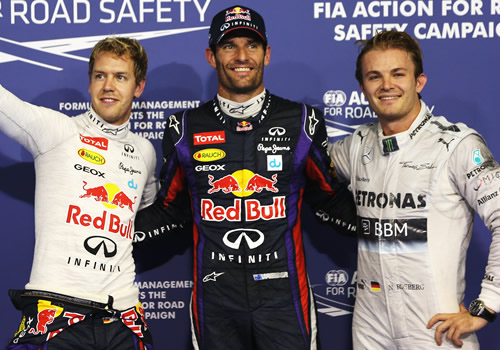 The Red Bull driver, who is stepping away from the sport at the end of this season, was 0.1 seconds quicker around the Yas Marina track as the constructors’ champions again dominated qualifying.

But his hopes of winning the race aren’t helped by recent statistics – only once in four races held on the circuit has the quickest qualifier taken the chequered flag and, on three occasions, the pole sitter has been forced to retire.

“This weekend has gone pretty smoothly and a win is certainly possible,” insisted Webber, whose last triumph came at Silverstone last summer.

“I’ve been quite good on the prime [tyres] in the race so I’m looking forward to getting on that. They are a lot of fans of Formula 1 here.

“A few Aussies come here – it’s an easy GP to attend and a nice atmosphere.”

Vettel blamed an error in turn one for his failure to take another pole position – although his Red Bull was still half a second quicker than Nico Rosberg, who will start from third in his Mercedes.

“I was pushing hard, that’s the reason behind it,” he said. “You can always say there is a bit here and there, but if you push to the maximum and try to get everything out you can do mistakes.

“I think it’s a great result for the team. At the start of qualifying, Mercedes looked very strong.

“Mark did a very good lap so congratulations to him. I should have done a bit better, but I don’t know if it would have been enough. He did a great job, no mistakes. It’s a great result for the team and we should have a strong race.”

Lewis Hamilton was the fastest British drive run fourth, spinning on his final lap to ruin hopes of a higher finish, while Ferrari’s Fernando Alonso, battling for second place in the drivers’ championship, ranked a disappointing 11th.

Lotus driver Kimi Raikkonen, 24 points behind Alonso in the overall standings, will start from fifth on the grid.