Abu Dhabi Grand Prix 2013: Sebastian Vettel is eyeing another place in the history books after his seventh straight race win 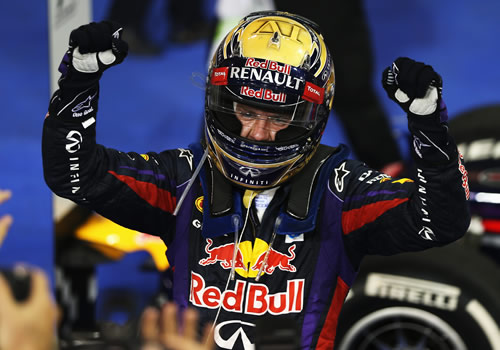 Sebastian Vettel is eyeing another place in the history books after securing his seventh consecutive Grand Prix victory in Abu Dhabi.

Vettel took the chequered flag for the 11th time this season after dominating the race, overtaking Red Bull team-mate Mark Webber at the first corner and blazing into the distance for a light to flag win.

With a fourth straight world title already secured last week in India, you could argue Vettel has little left to prove this season.

But he clearly doesn’t think that way, with races still to come in the USA and at Brazil’s fabled Interlagos circuit.

“It was incredible, the pace we had was scary at some points,” said Vettel.

“I felt very good on the softs and I was able to pull a massive gap from the start.

“I think it is hard to put these things into perspective but it’s incredible to have such a strong bunch of people who believe so strongly in what they are doing.

“The car was flawless, it doesn’t happen that often that the car responds to everything you want and I am looking forward to tonight, where there will be a few drinks.”

Vettel was fined 25,000 Euros last week for entertaining the crowd in New Delhi with some doughnut spins – and repeated the trick in Abu Dhabi, in what certainly is an expensive way to celebrate.

“I don’t think I broke any rules because I bought the car home this time and will hopefully be able to provide a fuel sample,” he added.

“Last week I left the car parked in the middle of the track which, from what I remember, was the main issue.”

“It was like a Cup final because I knew how much both drivers wanted to win this race,” said team principal Christian Horner.

“The start is always crucial and Sebastian made a superb start and Mark hit the Kers a bit too early. It was never going to be easy for Mark after that but he raced a great race and did well to get past Nico Rosberg.”

Whatever happens in the final two races, Red Bull’s domination of the season is total while Fernando Alonso edged closer to securing second place in the overall drivers rankings.

His took fifth place – and was cleared following an investigation for passing by going off the track – to extend his advantage over third place Kimi Raikkonen, who retired from the race as Lotus team-mate Romain Grosjean took fourth after three consecutive podiums in recent races.