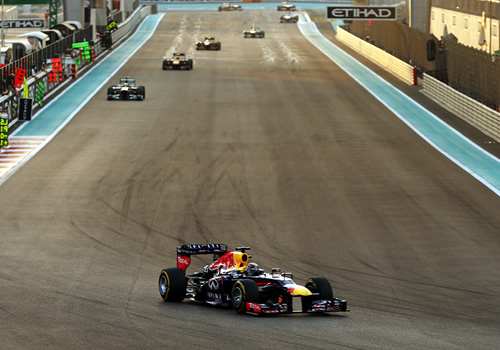 World champion Sebastian Vettel further underlined his total dominance of the Formula 1 season with another victory at the Abu Dhabi Grand Prix.

The Red Bull driver equalled the achievement of fellow German Michael Schumacher by winning his seventh straight race – and his 11th of the campaign.

It was his 37th career victory and team-mate Mark Webber and Nico Rosberg’s Mercedes completed the podium.

Fernando Alonso increased his advantage in second place on the overall drivers’ standings with a fifth place in his Ferrari, while nearest rival Kimi Raikkonen retired as his frustrating end to the season continued.

Vettel dominated the race, snatching the advantage at the start from Webber, whose second place continued the hoodoo of the pole sitter in Abu Dhabi rarely enjoying race day.

In five Grands Prix at the venue, only one in five races has seen the top qualifier take the chequered flag.

Red Bull team principal Christian Horner was quick to hail the performance as a “champion’s drive” – and promised to pay any fine levied by race officials for what is becoming Vettel’s victory trademark – doughnut spins right in front of the pit lane.

“It’s not often you get to drive a car like this. I love you guys, thanks you,” Vettel told his crew via team radio.

Elsewhere, Lotus’ Romain Grosjean continued his strong end to the season with a fourth place while Force India’s Paul Di Resta, batting for his F1 future, held off Lewis Hamilton to be the first British finisher in sixth.

In addition, Alonso’s fifth and Felipe Massa’s eighth meant Ferrari have now broken McLaren’s record of consecutive points finishes, a run that stretches back to the German Grand Prix in 2010.

Ashes 2013-14: England bowlers got rid of rustiness, says Matt Prior