Ashes 2013-14: Joel Lamy takes a look at Jonathan Trott's withdrawal and who England can select to bat at number three 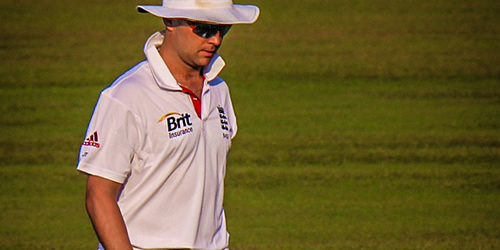 Jonathan Trott’s departure from Australia is a sad state of affairs.

After a Test match and the preceding build-up which has centred on aggression and petty journalism, the story of England’s number three going home completes a sorry few days for cricket.

It was revealed that Trott’s stress-related problems go back a while and have been managed within the England camp, and after an up-and-down tour, he has decided to take time away from the game and sort his health out.

It is, of course, the right decision, and there should be no blame towards England team director Andy Flower for taking a risk on Trott in the first Test when he must have felt he was in the right-frame of mind.

The 33-year-old’s departure, though, opens up questions on the modern game and – more pressingly – questions for the England management.

It is encouraging that the Warwickshire man was not suffering alone. This was not a Marcus Trescothick situation where the opener was struggling in silence.

Trescothick lost a good chunk of his England career because of his illness, having had to fly home from tours of India and Down Under.

Speaking to BBC Radio5 Live after the announcement on Trott, the Somerset captain said: “It grinds you down and just gets to you non-stop.

“There’s no hiding place from it, it’s 24/7. It doesn’t take into account what house you live in, what car you drive, what job you do and how much you get paid.

“The mind is an amazing thing that people are trying to understand and control. Jonathan’s got to just take a bit of time to get back on track and get back happy again.”

Trescothick was in India when he broke down in the changing room of a warm-up game and thought he was going to die. He had no idea what was happening to him.

His experiences, though, have helped shed light on the life of a professional cricketer and the problems which can develop from it.

In 2011, Michael Yardy flew home from the World Cup, whilst Andrew Flintoff and Matthew Hoggard have also admitted to struggling with depression.

Depression in cricket is of course not a modern problem, but the demands and intensity of touring are so incessant that it’s easy to see why some people eventually need help.

Even with families being flown over for part of the tour, England’s players (and remember, Trott plays the two main formats) are away from their homes most of the year. When you throw in the pressure of performing at elite level and the strength of mind needed to play Test cricket, it is a combustible mix.

But as Trott flies home with the supportive words from his team-mates and the cricketing world, the England management will have to find a way to fill the gap in the batting line-up.

Ever since his Ashes-winning debut in 2009, Trott has been the rock at number three which England had been craving for.

He made his hundred on debut at number five in the order but was moved to that pivotal number three spot, which Ravi Bopara and Ian Bell had filled during the summer.

After a shaky first tour of South Africa, Trott made that position his own with a series of big scores. And such was the calm and assurance which he brought to the role, the horror of Andrew Strauss cutting his third ball of the 2010/11 Ashes to Michael Hussey was tempered by the site of Trott striding to the wicket.

Alastair Cook may have taken the plaudits from that series, but Trott was also dominant, rubbing the Aussies up with his strange mannerisms and unflappable temperament.

His scoring had been great until this summer, when after a prolific Champions Trophy, he averaged 29.3 against the Australians. At Brisbane last week, his second innings knock of nine was horrible to watch for those who really wanted to see him succeed – and of course, all England fans.

Even with his troubling loss of form, Trott had so much good-will in the bank that there was little media pressure for him to be dropped. Yet now England will have to make do without one of their star batsmen, a man who was named ICC Cricketer of the Year in 2011 (the governing body’s top accolade) and who, we should also remember, averages over 50 in one-day internationals.

The obvious choices to fill that pivotal number three spot will be Joe Root and Ian Bell, but both bring their own risks. Root is an opener by trade, but largely struggled at the top of the order in the past Ashes series and was moved down to number six here to accommodate Michael Carberry.

Bell averages a shade under 40 at number three, but his last five innings at that position include scores of 235, 159 and 72. But moving him up the order would bring yet more upheaval to a batting line-up which, ironically, is now the least settled of the two sides.

Another option would be to bring someone in from the Development Squad, with the obvious choice being Sam Robson, an Australian under-19 player who has only recently committed himself to England. Robson was the third top scorer in Division One of the County Championship this season, racking up 1180 runs at the top of the order for Middlesex.

It would at least be interesting to see how the Australian press – who love to point out the number of South African-born players in the England squad – react to the sight of Robson coming up against them.

That decision is a pressing matter for England as they look to recover from a humbling defeat at Brisbane.

They will take the field against a Chairman’s XI in a two-day match over the weekend. But for the first time in over four years, they will not be able to call on their main man at number three.

Let us hope that that those 19 runs at the Gabba are not the last we see of the 32-year-old Trott in an England shirt. It would not be a fitting end.