Brazilian Grand Prix 2013: What lessons did we learn as Sebastian Vettel capped a remarkable season with another win? 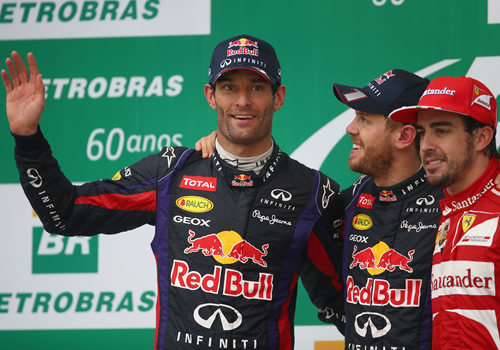 McLaren can’t wait for season of woe to end

Sebastian Vettel might not want this season to end but the chequered flag at Interlagos couldn’t come soon enough for McLaren. The Woking-based F1 team have endured a campaign to forget and Melbourne, on March 16th next year, will hopefully signal a new start. Jenson Button – who became the most experienced British F1 driver with 247 starts on Sunday – saved some blushes with his season best finish of fourth in Brazil. But you have to go back to 1966 (when there was nine races on the schedules as opposed to this year’s 19) when the team performed more poorly. Sergio Perez is already on his way out of the team after just one season – but problems seem deeper seated than who is sitting in the cockpit.

What next for drivers with new season just 142 days away?

What does the future hold for two promising British drivers Paul di Resta and Max Chilton?
Di Resta missed out on the points in his Force India while Marussia’s Max Chilton became the first rookie to finish every race in his first season. But neither have confirmed their drives for 2014. “People are saying it’s not budget-related but there are things which are but I will go into the winter with my head held high,” admitted Di Resta, who the paddock rumour mill suggest will be replaced by a new-look combination of Nico Hulkenberg and Adrian Sutil at Force India next season. In addition to the two Brits, Hulkenberg, Sutil, Perez, Heikki Kovalainen, Pastor Maldonado, Esteban Gutierrez, Charles Pic and Giedo van der Garde have yet to sign on the dotted line for the new campaign – now just 142 days away.

Farewell to Webber, a class act to the last

Mark Webber also leaves F1 with his head held high, after four podium performances in his last five races. Webber is off to join Porsche on a long-term deal racing LMP1 Sportscars in the FIA World Endurance Championship. But nine career wins and a third place in this year’s drivers’ standings underlines why the popular Australian will be missed. Indeed, even team-mate but certainly not close mate Vettel was nice about him post-race. “There is no point to lie at this stage and blow smoke up his [backside], we didn’t have the best relationship,” admitted the four-time world champion. “But I can say I learnt a lot from him, I learned to become a better driver due to his skills. “That’s why I consider him to be one of the drivers with the most talent we have on the grid.”