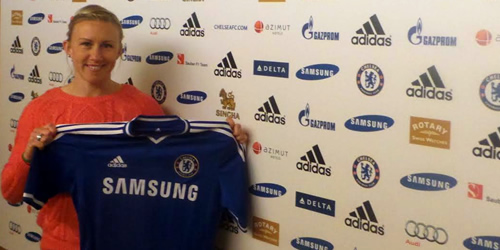 Chelsea Ladies have added England international defender Laura Bassett to their ranks and the former Birmingham City Ladies captain can’t wait to begin the latest chapter of her illustrious career.

Bassett joins from Birmingham City and goes straight in to the squad which departs for the International Women’s Club Championship in Japan this Saturday.

The former Birmingham captain, 30, has enjoyed a successful career to date, representing her country on 33 occasions including at the 2009 and 2013 European Championships as well as the 2011 Fifa Women’s World Cup.

At club level, Bassett has been a key member of every club she has represented with her second stint at Birmingham seeing her lift the 2012 FA Women’s Cup as well as successive FA WSL and Continental Cup runners-up spots.

And she sees no reason why her previous success can’t be emulated with her latest club.

“The move is absolutely brilliant and I can’t wait to get started. It’s great that we’ve got an opportunity like Japan to get straight in to the action rather than have to wait until pre-season,” Basset said.

“Chelsea is a massive club with a big club mentality so it is a new challenge for me, which is exciting. The staff and the players are really ambitious here and Paul and Emma have shown their intentions with the squad they are putting together so for me to be part of that is something I am over the moon with.

“This is a fresh new outlook, challenge and chapter of my career and I want to see if I can be part of something successful again with a new club. I want to be part of getting to where this club wants to go and where it has shown the potential it can be.

“There is no reason why we can’t be competing but we need to take things a game at a time, a step at a time and concentrate on getting things right in house. We need to set our intentions right and get the team spirit right so we can start the season the way we want.”

The England duo will join the rest of the Chelsea squad in Japan for the IWCC, and will meet either Australian League winners Sydney FC or Japanese League runner-up NTV Beleza in the last four; with Japanese Cup and League winners INAC Kobe Leonessa or South American side Colo Colo their potential final opponent.

And while Bassett admits she doesn’t know too much about their opponents in Japan, she is excited to have the opportunity to lift some silverware so early in her Chelsea career.

“Japan is a fantastic opportunity, it is the time of the year where we tend to relax physically and mentally but when an opportunity like this comes along you have to take it to experience the culture, the travel and to play in a tournament like it,” she added.

“It’s a great chance to settle in and meet the team both on and off the pitch so when January comes round it makes that transition much easier.