England’s Mike Brown: I can do the most damage at full-back 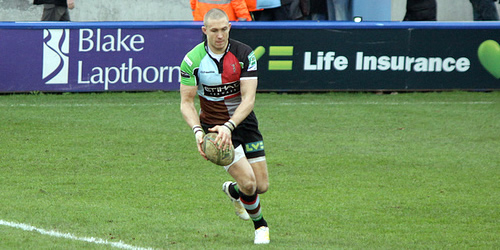 Mike Brown believes his most dangerous position is No15 after the England full-back’s starring display in a 20-13 win against Australia.

The Harlequins man was Stuart Lancaster’s standout performer as he helped inspire the Red Rose to overturn a seven-point half-time deficit and beat their World Cup rivals at Twickenham on Saturday.

The 25-year-old’s starting spot had come under scrutiny in the lead-up to the opening Test this autumn after Ben Foden’s masterclass in Northampton’s win against Saracens, overshadowing England rival Alex Goode.

But Lancaster stuck by Brown, who was similarly impressive in wins against Argentina in the summer, and the Quins No15 wants to cement his favoured position in the Red Rose side.

“I think over the last few years I’ve been building up nicely,” Brown said after the seven-point win.

“I’ve been keeping my head down and working hard, trying to improve every aspect of my game. That’s what I’ve be focusing on.”

He added: “It’s been a hard few years. It’s great to get back in squad – it’s such a brilliant squad to be involved in.

“The opportunity on the wing has helped my confidence loads and I’ve started the autumn series at No15 and there’s still so much work that I need to do
to keep that spot.

“That’s [full-back] where I grew up playing and where I feel I can do the most damage.

“I’m just happy to get in the team and do a good job on the wing. Now I want to stay at full-back and that means I have to work even harder.”