Ireland v New Zealand: Ryan Bailey takes a look at four talking points ahead of this Sunday's clash at the Aviva 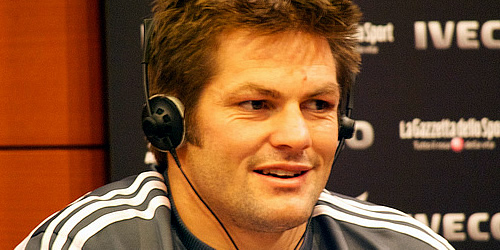 History in the making?

Although both France and England have run them close in recent weeks, New Zealand have once again underlined their continued domination during the northern hemisphere tour. Head coach Steve Hansen was expected to rest several of his senior players for the trip to Dublin after an exhausting schedule but the prospect of finishing the calendar year unbeaten, and in the process make rugby union history, means the stakes are high for the All Blacks. However, head coach Steven Hansen has made seven changes to the side that won narrowly at Twickenham last time out, giving Ireland some hope that they can beat their illustrious opponents for the first time. The hosts will have to pull something special out of the bag in order to do so. No international team in the professional era has enjoyed a perfect calendar year, with the All Blacks side led by Wayne Shelford – that won all seven of their Tests in 1989 – the last major nation to achieve the feat did so when rugby union was still an amateur sport. However, New Zealand themselves came close to it again when they won 11 games and drew one under John Hart in 1997. They are no doubt the team to beat in world rugby and victory on Sunday would only further underline their dominance of the game. All eyes will be on Dublin to see if the All Blacks can make history.

Good or disastrous start for Schimdt?

The margins in sport are minor. A promising victory over Samoa in Joe Schmidt’s first outing as Ireland head coach yielded great hope and optimism that the former Leinster tactician could finally extract the best out of a talented generation. However, an underwhelming performance and bitterling disappointing defeat by Australia last week has left Ireland’s November international series on the verge of being deemed a complete failure. With the All Blacks the final opposition until next spring’s Six Nations, belief and expectation among the fans has quickly dwindled. Therefore, Sunday’s game against the All Blacks has become a pivotal one for Schimdt and his reign. An encouraging performance, regardless of the result, would be hugely beneficial heading into the winter break and give a different look to a potentially disastrous autumn for the Irish. On the other hand, a display similar to the one against Australia would leave the fans dispirited and left scratching their heads ahead of the Six Nations. Schmidt extracted the very best out of Leinster as they claimed two European Cups during his time in charge as well as the Pro12 and Amlin Challenge Cups and his appointment brought about a huge sense of optimism on the emerald isle after the failings of Declan Kidney previously. The Kiwi is by no means under pressure at this early stage but another comprehensive defeat in just his third outing would be a huge blow to Ireland as they look to build towards the 2015 World Cup.

One aspect of the Irish performance against Australia, and indeed against Samoa too, that left fans and management scratching their heads was the defensive failings. Schimdt and assistant Les Kiss are renowned for their defensive organisation and it was a characteristic of Leinster’s dominance during his reign at the RDS. However, the past two games have seen an abundance of missed tackles, defensive errors and general naivety which led to Ireland being cut open at will. While there were some superb individual performances, Peter O’Mahony among others, these were games riddled by basic errors and a general lack of cohesion in defence. If Ireland allow the All Blacks a sniff of the space they afforded to Australia last week, then it will become a very long afternoon for those in green, both on the pitch and in the stand. Kiss has ensured the squad have sat down and scrutinised the videos of the Wallabies game and is determined to eradicate those errors, having spent hours on defensive play in training at the team’s Carton House base this week. However, all eyes will be on how Ireland line-up defensively and attempt to thwart the potent opposition.

The IRFU have been heavily criticised for their tactic of trying to manufacture an atmosphere at the Aviva Stadium. The renovated Lansdowne Road venue has resembled somewhat of a graveyard in recent times and with little to inspire the fans on the pitch, things haven’t improved during this autumn series. Just under 40,000 were in attendance for Joe Schmidt’s first game in charge and a few outbursts apart, there was nothing to write home about despite the PA’s attempt to generate an atmosphere by playing music in between plays. Nonetheless, the visit of the mighty All Blacks should naturally generate a buzz among the Dublin faithful and give the fans an incentive to spur and lift their team on. With the sold-out signs in place for this highly-anticipated encounter, there is no reason for fans to generate a buzz and whip up an atmosphere. Then, the team may just perform on the pitch and in the process, make the Dublin venue a fortress again.