La Liga wrap: Carlos Vela becomes the first Mexican to score four in a league game as Sociedad come from behind to beat Celta 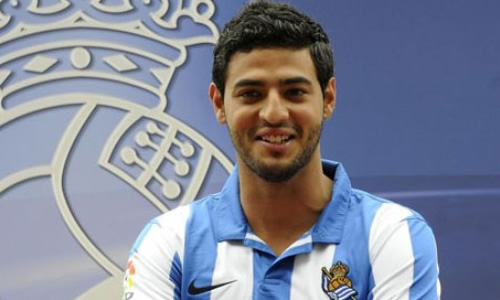 Plenty of goals were scored in La Liga over the weekend, almost making up for the lost time during the recent international break. The whopping tally of 42 goals made it the highest-scoring weekend in five years as the top three sides racked up the goals. Atletico Madrid, Real Madrid and Barcelona scored 16 goals between them, without conceding, whilst there was also a seven-goal thriller at Sociedad on a super Saturday. The following day Espanyol, Sevilla and Villarreal all won by three goals, and then Athletic Bilbao made one of their trademark comebacks against Malaga to ensure enough drama amongst the glut of goals.

Costa cracker the pick of Atletico’s SEVEN against Getafe

Not for the first time this season, Diego Costa stole the spotlight amidst a wonderful display from Atletico. On a weekend when both Barca and Real weighed in with goals, Atletico proved they too could match the title favourites by smashing Getafe 7-0! Raul Garcia and David Villa both notched twice but Costa’s extraordinary overhead kick was the highlight of the game. Villarreal’s Uche scored an overhead kick during their win over Levante but Costa’s was undoubtedly the goal of the weekend, perhaps because it looked so unorthodox. It appeared Costa would try the scissor kick but the ball was too high and he made a late choice to contort his body and reach the ball. He made perfect contact and the ball flew in, which will no doubt impress Spanish manager Vicente del Bosque.

Almeria had won three successive games prior to their clash with Real Madrid, but even in their good form, they could not contain a rampant Cristiano Ronaldo and blistering Gareth Bale. That wasn’t the real surprise though, as for the first time in five league games, Madrid kept a clean sheet! There was a scare at the end of the game though as Ronaldo limped off with what appeared to be a thigh injury which could rule him out of Champions League action this week. Nevertheless, the forward tipped for the Ballon d’Or continued his stunning form with another Madrid goal as five different players scored in the 5-0 win. Bale grabbed his fifth since joining Madrid, and Karim Benzema, Isco and Alvaro Morata rounded off a comprehensive win.

Barcelona put in a typically dominant performance against Granada, but Tata Martino’s side was distinctly unfamiliar. This game marked the first that the Catalans have played since knowing the full extent of Lionel Messi’s hamstring injury. But Martino’s men still put in a strong display and won the game 4-0. There are few doubts that Barcelona are a less attractive force without Messi which perhaps showed early on as two penalties put Barca 2-0 up. Andres Iniesta and Cesc Fabregas took on the responsibility of dispatching the penalties before Alexis Sanchez and Pedro Rodriguez rounded off the win.

There has been plenty of talk about Arsenal requiring another striker to give Olivier Giroud a break as an ex-Gunner stunned Europe on Saturday with an incredible four-goal haul. Carlos Vela became the first Mexican to score four in a La Liga game as Sociedad came from 3-1 down against Celta Vigo to win 4-3. With Messi out injured, it was Vela who injected La Liga with a virtuoso performance at the weekend, showing the sort of clinical finishing we have so often associated with the Barcelona star. His quadruple lifted Sociedad from mid-table to sixth as La Real complete their recovery from being in the drop zone after six games.