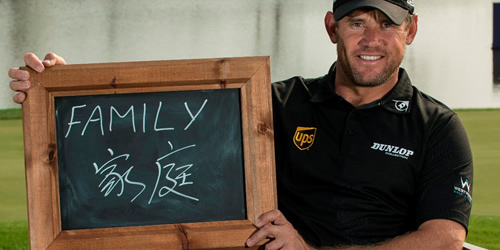 Competing in some of the most luxurious places in the world as a global golf star may be a far cry from growing up as a 13-year-old in Worksop who had never picked up a club – but Lee Westwood recently revealed to Ballantine’s how it’s his family that really helps him to stay true to himself.

Westwood, along with Padraig Harrington and Miguel Ángel Jimenez took some time during the BMW Masters at Lake Malaren, Shanghai to talk to Ballantine’s about their unique stories which help them stay grounded despite the pressures of the game.

Westwood did not grow up as a child prodigy with a keen amateur golfer father like Tiger Woods, but took a different path to the top and one that is followed by many other professionals who pick up a golf club at a very young age.

Given his first pair of golf clubs as a Christmas present by his grandparents, they were put straight into the cupboard by Westwood. It was only after his 13th birthday that his father decided to take up the game, convincing Westwood to join him and the two playing their first ever round together at Kilton Forest – a local municipal course in Worksop, Nottinghamshire, England.

From that day, Westwood was en-route to the World No 1 spot, which he held in October 2010 and again in April 2011. Despite his success and being one of the most recognisable faces in one of the biggest sports in the world, Westwood insisted his family would forever keep his feet on the ground.

“It comes back to how you were brought up,” he said. “Trying to be yourself and remember your roots. If you look at other golfers on the tour, for the most part they have the same character on the course as off it.

“For me it has been a combination of factors that have shaped me but, above everything, my upbringing and my parents have been key in me staying true to myself.

“This time around, I have had five weeks off before this tournament, when I relaxed and spent time as dad and husband. I was able to spend time at home and to switch off and relax completely.”

Ballantine’s asked the world’s top golfers what inspires them to ‘Stay True’ on the golf course at the BMW Masters, Shanghai. To find out more about the new global marketing campaign for Ballantine’s, Stay True, Leave An Impression, please go to www.ballantines.com