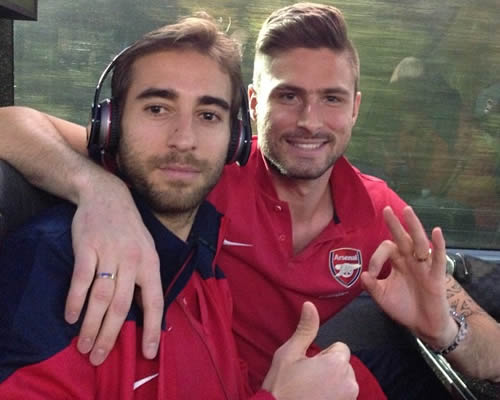 Arsenal moved seven points clear at the top of the Premier League table thanks to a 3-0 win at Cardiff City on Saturday.

Aaron Ramsey headed in Mesut Özil’s cross in the 29th minute to give the Gunners the lead before substitute Mathieu Flamini rifled home to make it 2-0 late on.

And in-form midfielder Ramsey then added gloss to the scoreline when he drilled in a third in stoppage time.

Saturday’s Premier League games inevitably prompted a flurry of activity on Twitter – and here are our favourite updates, in chronological order.

Golfer Ian Poulter ‏(@IanJamesPoulter) is thrilled to see Ramsey make it 3-0: “Great finish Ramsey….. Loving the exhibition at the end.”

Scotland international James Mcarthur (‏@jamesmcarthur16) wants some of the midfielder’s secret tonic: “Can I have whatever Aaron Ramsey is having #goals #arsenal”

Celebrity Arsenal fan Piers Morgan ‏(@piersmorgan) is impressed by Ramsey’s sparkling form: “I wonder what the odds were on @aaronramsey scoring 13 goals before December… #Afc”

Club-record signing Mesut Özil (‏@MesutOzil1088) is understandably delighted, too: “3:0 away. what a game. I love this team and this Club. #premierleague #arsenalfc.”

Ex-England striker Michael Owen (‏@themichaelowen) has had some tweets aimed his way: “I love the Arsenal fans that tweet me abuse every time their team win just because I predicted they would come 5th prior to the season.”

And finally, Stoke goalkeeper Asmir Begovic (‏@asmir1) apologises to Potters fans after a 4-0 drubbing at Everton: “Bad performance by us today, credit to Everton, fully deserved the win! Onto the next one for us. Great support as always! #potternation”