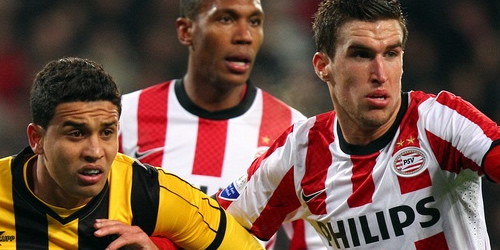 David Moyes has been linked with a swoop for Kevin Strootman (right) Photo: voetbal_foto via Flickr

The Netherlands international has been one of the driving forces behind Roma’s good start to the season after moving to the Italian capital from PSV Eindhoven in the summer.

The 23-year-old, who cost i Giallorosso in the region of €17m (£14.2m), has scored two goals and made five assists in 11 Serie A appearances this season.

Strootman was linked with Manchester United during the summer before moving to Roma, and David Moyes eventually signed Marouane Fellaini in a £27m deal from Everton.

But Netherlands manager Advocaat, who formerly coached Rangers, expects Strootman to seal a move to a top Eurpean club in the near future after an impressive start to his Roma career.

“It frankly surprised me that he did not get to the absolute top last summer and was on the side a little. I do not think he will stay at Roma that long. If Kevin is at this level, he will be plucked away.

“And then it will be a team of the calibre of Manchester United.”