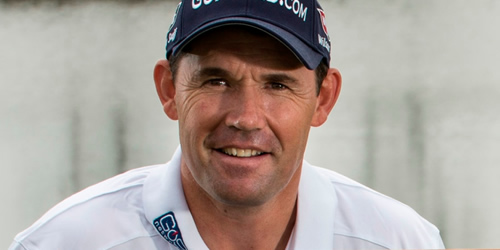 Miguel Ángel Jimenez and Padraig Harrington both came from similarly modest backgrounds, both from big families – Jimenez one of seven brothers, Harrington the youngest of five – in Malaga and Dublin respectively, where they both still live when not on tour, but both came to discover golf in different ways.

Harrington’s father was a policeman who was forced into building his own golf course in the 1970s for his police colleagues who were unable to join a club, allowing a young Harrington to join in. Jimenez did head to a local club, but as a caddy, more concerned with earning a day-to-day wage to support his family than any dreams of glory.

But glory was to come for both, eventually, as Harrington turned professional belatedly at 24 years old, after originally training to be an accountant, while – after a steady start to his career – Jimenez captured his first title – the Piaget Belgian Open – aged 28.

Three Majors have followed for Harrington while Jimenez has captured 25 titles and also carved out a place as one of the most popular golfers with players and fans for his personality on and off the course. Despite their fame and fortune, both have remained true to their roots.

“There is a lot of too-ing and fro-ing but, emotionally, there is no doubt it is my wife and mother I turn to,” said Harrington.

“It used to be my father, but he has now passed away. So now, it is very much my wife and mother who I turn to for a sympathetic ear and, at times, a kick up the backside when I need it. I would emotionally explain myself to them.

“You spend more time with your caddy than anyone else in your life, so it is important to have someone you trust and can talk to. My caddy is a close friend of mine; we are married to sisters and have travelled the world together for nine years.”

Jimenez added: “The real me is what you see on the golf course – that’s what I love to do! I love the game and I love competing.

“I have a golf school, and the main thing I tell the kids is that the first thing you need to do is to like the sport. I want people to see me as a person who loved golf, gave delight to golf, always practiced, never tired of golf.

“My values are very clear – you need to be honest with yourself and my family is a key part of that; my mother, father and my brothers. It’s what I learned from them when I was very small and what I have learnt since I was a young boy at school, seeing my father and brothers working hard until late. It’s something I’ve grown with.”

Ballantine’s asked the world’s top golfers what inspires them to ‘Stay True’ on the golf course at the BMW Masters, Shanghai. To find out more about the new global marketing campaign for Ballantine’s, Stay True, Leave An Impression, please go to www.ballantines.com

England’s Mike Brown: I can do the most damage at full-back