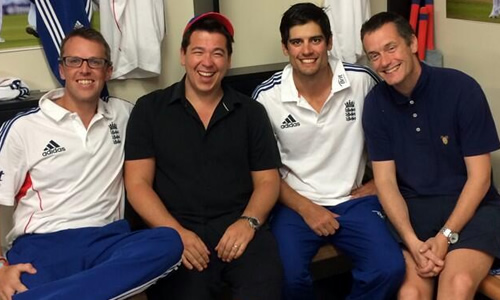 Stuart Broad silenced his Australian detractors after the England bowler took five wickets to reduce the hosts to 273-8 on day one of the first Ashes Test at the Gabba.

The 27-year-old was subjected to a chorus of boos from the Brisbane crowd on day one but responded with figures of 5-65, including the scalp of Australia captain Michael Clarke.

Here is the best of the Twitter reaction from the professionals, as well as some famous sporting names, to the opening day’s action on Thursday.

Manchester United defender Rio Ferdinand ‏(@rioferdy5) proves that he is a real hardcore cricket fan: “When does the #Ashes start people, I’m looking forward to it???”

England’s man of the moment Broad ‏(@StuartBroad8) enjoys his achievement and Graeme Swann’s goading of the Australia fans: “Special to take 5fer 1st day of the Ashes series. Laughed at this pic, love @swannyg66!”

England spinner Swann (‏@Swannyg66) thanks the local supporters for bringing out the best in Broad: “Hats off to @StuartBroad8 for taking five on that day one pitch. Great support from the Barmy Army as ever, amazing motivation from the locals.”

Reserve wicket-keeper Jonathan Bairstow (‏@jbairstow21) is delighted to see Broad set the tone for the series: “What a performance today by @StuartBroad8 fantastic way to start the tour buddy! #ashes”

England bowler Steven Finn (‏@finnysteve) promises more of the same on Friday morning: “Well bowled @StuartBroad8. Top start to this Ashes tour & a good day in the field for us. More of the same tomorrow!”

Legendary England all-rounder Ian Botham ‏(@BeefyBotham) is happy to see Broad silence the Australian media: “What a great day for England !!! Broady magnificent five wickets …what a way to shut up the local press…..egg on their faces!!!”

One of Australia’s all-time great bowlers Glenn McGrath (‏@glennmcgrath11) is pleased by the hosts’ response to a difficult afternoon session: “Australia finish the day at 8/273. Good come back from Haddin 78* & Johnson 64. Stuart Broad answering critics with 5/65. #Ashes”

Ashes-winning England captain Michael Vaughan (‏@MichaelVaughan) surprisingly gives the Aussies some praise: “Great fight back from the Aussies… Proving the pitch is a really good one… #Ashes. Outstanding from @StuartBroad8 today… Look forward to the headlines tomorrow…. #Ashes.”

Australia legend Shane Warne (‏@warne888) feels it was England’s day – as well as praising Cook, for a change: “Good fight back from Australia late in the day, but England easily won the first comfortably. Alastair Cook had a good day as skipper too.”

All-rounder Tim Bresnan (‏@timbresnan) praises the travelling England support: “What a start to the series that was. Class from @StuartBroad8 good support from the @TheBarmyArmy as ever. #BestInTheWorld”

Manchester United coach Phil Neville (‏@fizzer18) is loving the Ashes action: “Morning all – great start by England- got to say test match cricket like this you can’t beat!!”