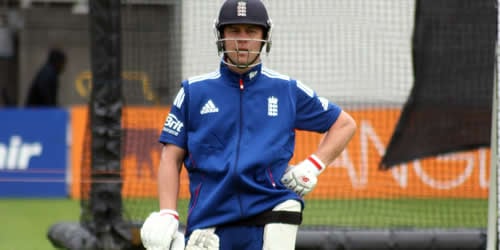 Jonathan Trott has returned from England’s current tour of Australia with a stress-related illness.

The 33-year-old batsmen endured a miserable first Test at the Gabba as he managed to score just 19 runs and struggled to cope with in-form Australia bowler Mitchell Johnson.

Here is the best of the Twitter reaction from the cricket fraternity and wider sporting world to Trott’s Ashes blow.

Former England cricketer Marcus Trescothick ‏(@Trescricket) suffered from a similar problem which forced him to fly home from the Ashes tour in 2006-07 and is well-placed to have his say: “Not good news coming out of Australia this morning. Sad news, hope Trotty is ok. It’s not start pointing to many fingers at the reason why and how, let’s just think about the man in the mist of it all.”

England all-rounder Luke Wright (‏@lukewright204) insists there are more important things than cricket: “Hope Trotty is ok. The Ashes are important but there are bigger things in life than just cricket. Hope he is back well soon.”

Former Ashes-winning batsmen Paul Collingwood (@Colly622) echoes Wright’s sentiments: “Cricket is important but your health is your life. Hope Trotty recovers enough to get back to the top. Now is the time to fight for these Ashes like never before, face to face. Good luck boys you know you can do it #england #ashes”

One of England’s heroes from 2005 and current pundit Michael Vaughan (‏@MichaelVaughan) gets something off his chest: “I do feel guilty for criticising Trott this week .. I wasn’t to know what he was going through and I can only comment on what I see …”

Australia legend Shane Warne ‏(@warne888) wishes Trott all the best: “Feeling for Jonathan Trott. I hope he and his family are left alone by all media & he’s able to recover quickly & return to the Eng team!”

However, the Aussie star has rather more stern words regarding Michael Clarke’s fine for his comments directed at James Anderson: “On another note, I think it’s a disgrace that @MClarke23 has been fined. What about what Jimmy Anderson said to Bailey, which wasn’t heard. Unfortunately only Clarke’s reaction to Anderson’s was heard live, we all heard Anderson’s sledge that led to Clarke reacting! Everyone should have just laughed, moved on & be thankful for Ashes fever. Bring on Adelaide I’m sure both teams are saying. Lastly as an international sportsman, if you decide to dish it out ie sledging you have to be prepared to cop it back too & not complain.”

Ex-England man Phil Tufnell (‏@philtufnell) insists Trott is still a top plauyer: “Thoughts go out to Jonathan Trott in a very tough time, hope he is able to recover quickly and return to the Eng set up. Despite a tough start to the series, Trotty will be missed. Top player, top bloke. Things like this put cricket into perspective. It sounds as if Trotty has been suffering from this for a while, sure he will receive all the support needed to bounce back quickly! No replacement to be called up. Expect Bell, possibly Root to bat at three – opening up a slot at six. Practice game huge for Ballance, Bairstow, Stokes.”

Australia’s Shaun Tait ‏(@shaun_tait32) feels everyone needs to chill out: “Trott situation might make people realise that it is only a game and to relax the carry on that has been surrounding this Ashes so far.”

Manchester United legend Gary Neville ‏(@GNev2) is looking forward to a very tight Ashes series: “Hope Trott is ok and back soon. Test Cricket is tough and we are going to see a major Ashes battle in the next few months.”

England’s Rugby World Cup hero Matt Dawson (‏@matt9dawson) wants Trott’s illness to be respected: “I know column inches have to be filled but we sound like a bunch of pomme whinges. Respect Trott’s problem and we got turned over. Move on!”