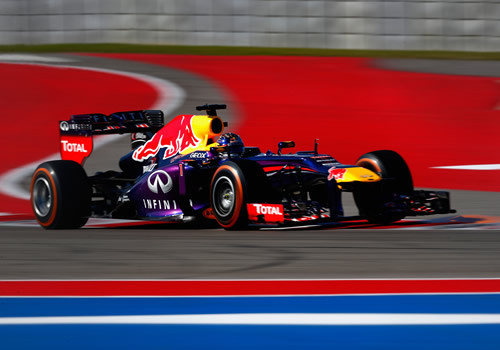 World champion Sebastian Vettel’s domination of the season continued as he secured pole position for Sunday’s US Grand Prix in Austin.

Vettel edged out team-mate Mark Webber by a tenth of a second as Red Bull again stamped their dominance on proceedings while Romain Grosjean’s strong end to the season continued as he guided his Lotus to third.

Nico Hulkenberg guided his Sauber to fourth, while Lewis Hamilton was the top British driver in fifth, just ahead of Ferrari’s Fernando Alonso.

But it was take some stopping Vettel, who remains on target to equal Michael Schumacher’s all-time record of 13 wins in a single season and Alberto Ascari’s 60-year best of nine straight race wins.

And it was also a birthday to remember for Red Bull team principal Christian Horner, as his drivers locked out the front row for fifth time this season.

“It’s a good result to have both cars on the front row,” said Vettel, who now has 44 career pole positions on his record.

“It was a tricky session as the wind picked up quite a lot from this morning. It’s not that easy round the high-speed corners.

“I was not happy with my first run, but I think I had a solid run at he end which was enough to put the car on pole.

“It was a good battle with Mark, he has got closer and closer as the weekend has gone on. I think he might have had a mistake in his final shot.

“I’m happy with pole position. I really like this place. I like this circuit. It’s important to start on the clean side so we’ll see what we can do tomorrow.”

Webber – who will retire from F1 after the concluding race of the season in Brazil – admitted disappointment with his performance, claiming he let pole position slip through his fingers.

“Seb put three sectors together and I put two-and-a-half together,” he said.

“It’s not satisfying when you do that – it’s not your job. But I’m happy to be there on the front.”

Grosjean insisted he was happy to be the best of the rest, as he seeks his fourth podium finish in five races.

“The Red Bulls are very quick, but we are quickest of the rest,” he said.

“The race is long and we will see what we can do with strategy, but it’s good to be here.”