US Grand Prix 2013: What lessons did we learn as Sebastian Vettel secured another dominant win on Sunday? 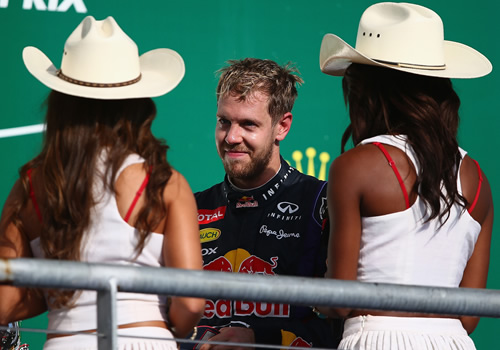 Everyone thought this would be another weekend of Red Bull dominance and most believed Mercedes would be the closest if anyone was going to come close to matching them. But no-one clearly told that to Romain Grosjean. Vettel might be finishing the season in a blaze glory – a win in Interlagos would be his ninth straight victory – but the French driver’s recent achievements are also story worthy. This time last year he was making headlines for all the wrong reasons – labelled a maniac by some for his tactics, famously wiping out Fernando Alonso, Lewis Hamilton, Sergio Perez and himself with his recklessness in Belgium. But Grosjean is the best of the rest on current form and made a textbook storming start at the Circuit of the Americas, a piece of skilful driving that alone deservedly secured a runners-up spot. He has now made the podium in four of his last five races and his second place is a career best.
Lotus are talking big things for next year and Grosjean is in place to deliver, especially now Kimi Raikkonen is heading to Ferrari.

Don’t mess with Texas, this is a track to saviour

This is a great circuit and the crowd turn-out suggests that F1 might just get a foothold and enable Bernie Ecclestone to finally ‘crack America’. With a cresting layout and sweeping turns, this is a track that should encourage great some racing – unfortunately Sebastien Vettel had other ideas. And that’s probably F1’s biggest problem in the US, the fans here don’t like a procession or a foregone conclusion. This race was both.

Thoughts already turning to 2014 as season meanders to conclusion

When the most exciting thing about the final race of the season is the battle for second in the constructors’ standings – Mercedes lead Ferrari by 11 points – it says a lot. However, with so many drivers’ futures still undecided, the concluding stop of the season at Brazil’s storied Interlagos circuit could still deliver some drama. McLaren driver Sergio Perez had another frustrating day in Austin – which will only help those that claim he has no-one to blame but himself for the fact that Formula Renault 3.5 champion Kevin Magnussen is taking his seat next season. But he had a better day than team-mate Jenson Button. Indeed he has beaten Button five times, including the last three straight races. That will come as no consolation, indeed it will only fuel the Mexican’s burning sense of injustice. Elsewhere, Paul di Resta should have done enough to secure a drive with Force India next season while Adrian Sutil’s first lap crash won’t have done his agent any favours in contract talks.