Chelsea midfielder Willian insists the Blues were always his first choice, despite reported interest from Liverpool and Spurs 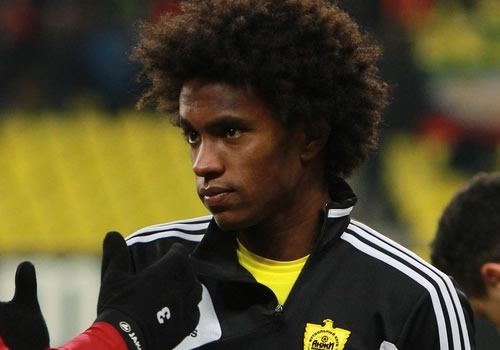 Willian has insisted Chelsea was always his number one destination this summer despite reported interest from Liverpool and Tottenham Hotspur.

The Brazil international sealed a £25m move to the Blues from Russian outfit Anzhi Makhachkala ahead of deadline day after previously completing a medical at Chelsea’s London rivals Tottenham in late August.

And Willian revealed that the west London side initially expressed their interest in signing the midfielder two years ago, before he eventually signed a five-year deal at Stamford Bridge earlier this summer.

“Two years ago, Chelsea made an offer for me when I was with Shakhtar Donetsk. They didn’t want to sell me but it made me more interested in Chelsub,” Willian told the Sun.

“I feel really happy that the supporters take the time and the trouble to write about me. It’s a privilege to hear them clapping and singing about me.

“Never once did I say I was going to sign for Tottenham or Liverpool or for anyone else in the summer.

“There were negotiations going on with other clubs, as well as Chelsea, that my people were having.

“Chelsea were interested in me and when they made an offer this time I didn’t think twice. My heart was already at Chelsea.

“I had been following their games even more closely after their first offer.

“I didn’t sign a contract for Tottenham or have a medical. During the negotiations there was talk about a medical but it never happened. I made absolutely the right decision to come to Chelsea.

“The most important thing for me is to be happy, it’s making my dream come true.

“I wished so much to play here and work with Jose Mourinho, who is one of the best managers in the world. Everywhere he has been he has won titles. Everyone likes to work with a winner.”

Wenger: Losing Fabregas may have been worse than Van Persie

David Moyes: Arsenal are the only side to have shown consistency