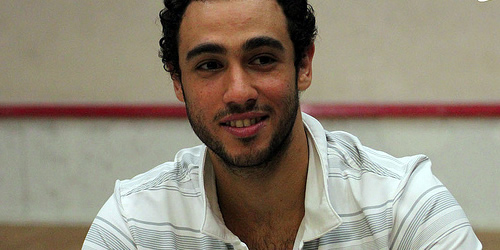 Ramy Ashour saw off a spirited performance from Saurav Ghosal to win his quarter-final 11-9, 11-5, 11-9 on Wednesday.

Ghosal had become the first Indian to reach the World Championship quarter-finals, partly due to avoiding seventh seed Peter Barker, who unfortunately had to retire injured when 2-1 against Finn Henrik Mustonen.

But the 27-year-old had beaten the higher-ranked Alister Walker in the second round and, certainly for two of these three games, did not seem to be here by mere good fortune.

He was full of running, regularly contorting his 5ft 6ins frame into seemingly impossible positions, but world No1 Ashour, ultimately, had just a little too much quality.

“I played well in the first and third games. In the second, I don’t think my level really dropped, but the variation of the height especially, it wasn’t quite good enough against someone like Ramy,” Ghosal said.

“Ramy fights with himself a little bit a lot of the time. I’ve known him since we were about 13 or 14 years old, so I know him very well, and in the first game I had a feeling that he was going to be rushing it a little bit and going short, very quickly.”

“But he is so good with the racket that he can get away with it. And he still pulled out some unbelievable stuff, which kept him in that first game to a great extent.”

“Anyone else who was playing with that attitude would not be in a position to come back, but he’s so, so good with the racket he manages, and finds an extra gear and strings together four or five unbelievably high-quality rallies to take it away from you and very quickly.

“I wish him the best of the luck for the semis.”

The champion himself, in one breathless, excited, stream of consciousness, said: “I am delighted with the win tonight, but it’s the story behind the story the win.

“The whole day today, after a very tough four games with Cameron Pilley, a very strong player, I had a bit of a niggle in my legs.

“And sometimes when you are totally down, and you come up and beat such a great player like Saurav, playing someone like him is tough mentally and physically, especially because he is that small but can do all this on court.

“There’s something else I want to talk about. I know you maybe want me to speak about the match more, but actually I wanted to thank a couple of people, who really stand next to me when I’m down.”

“My mum, my dad – before anyone, of course – our masseur, Doug, the physiotheraphist, a great physiotherapist and I don’t know that he’s enjoying treating this leg.

“And there’s a lot of other people I don’t want to forget. We have been doing a documentary about squash for three years now, about squash in the world and the relationship between squash and the revolution in Egypt back home, and what happened with us.”

The documentary Ashour is referring to is Egyptian film Wallbangers – a movie following the lives of “The Artist” Ashour, “The Godfather” Amr Shabana, female players Raneem El Weleily and Nour El Sherbini, Karim Darwish and The Elshorbagy brothers; a “story from the heart of the Egyptian revolution”.

Ashour added: “And last but not least, I want to thank you all for being here today, and hopefully me and Nick will put on a great show. He’s a great player, so it should be a great semi-final.”

Nick Matthew had earlier beaten Amr Shabana in what he made to look a fairly straightforward victory, 11-8, 11-4, 11-7.

Shabana showed signs of what has made him four-time champion in this event, but Matthew’s physical intensity was, in the end, too much for the 34-year-old.

Which was something Matthew, himself playing very well at 33, alluded to at the end of game.

“I feel like I’m in the best shape of my life. I’m 33, and I’m in that window between having that experience that maybe I didn’t have – or use, ever – and still being physically at the top of my game so hopefully I can use that for as long as possible,” he said.

“The last two years, there’s just been two guys [Gregory Gaultier and Ramy Ashour] that have been better than me, as well as I have played, and James [Willstrop] has been up there too.”

“So it’s going to be a new challenge, and I’ll try to reach their level.”