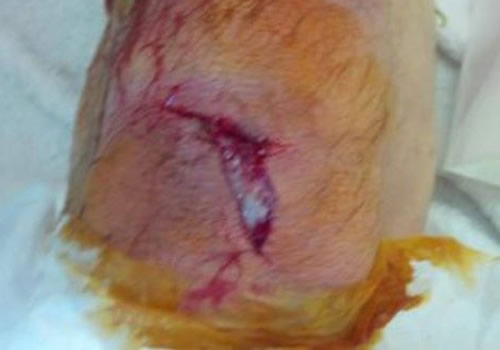 Laurent Koscielny has moved to play down fears about the injury he picked up in Arsenal’s 6-3 defeat at Manchester City by insisting that it is “not too serious”.

The French centre-half was carried off on a stretcher in the 42nd minute at Etihad Stadium after injuring his knee as Alvaro Negredo scored City’s second goal.

There were concerns that the 28-year-old had suffered knee ligament damage, but the defender appeared on the bench in the second half.

And the defender took to his official Facebook page after the final whistle to ease fears about his long-term fitness by posting a picture (above) of his knee, showing a deep cut.

The photo was posted with the message: “Not a too serious injury for Laurent.”

Belgium international Thomas Vermaelen, who replaced Koscielny, is Arsenal’s only other recognised centre-back.