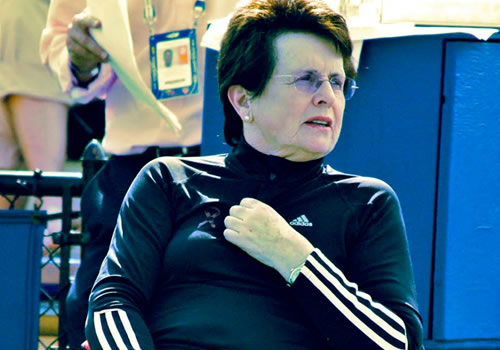 Those were the words of Billie Jean King, who spearheaded the creation of the WTA 40 years ago. But as King celebrates her 70th birthday, this fan recalls that it started for her long before.

What was it about one particular woman, wielding her wooden racket in the black and white world of 1960s television, that imprinted itself in this fan’s memory? She came from another country, and she played a game I had barely learned to understand, let alone master.

To my eyes—almost 10 years to the day younger than hers—she looked middle-aged even though still in her early 20s. I knew nothing of her background nor of her achievements in tennis, other than she had just beaten the very British Ann Jones. But once I heard her name, I never forgot it: Billie Jean King.

Her story has simmered in the bloodstream ever since, because her name takes me back to my very first monochrome memories of tennis and of Wimbledon—for it was only Wimbledon that made its way into British living rooms back then.

These were impressionable years for a girl heading towards adolescence, and opinions are formed in unexpected places: For me, King was one of those places.

For here was a player—and a champion at that—who did not conform to the elegant ideal of Margaret Court nor the girl-next-door image of Jones. She was short, wore glasses, was feisty and undoubtedly strong—and all this was strangely reassuring to a girl bombarded by the superficial glamour of the “swinging ’60s”.

By the time King, then still only 23, was having her impact on this fan in England, she had begun not only to stamp her achievements on the tennis record books, but also to make her mark in social and political issues off court.

It started with the tennis

No, it started with her name. When she was born, in Long Beach, CA in 1943, Billie Jean was to be Michelle Louise. But her father, Bill Moffitt, was away at war, and so her mother named her baby daughter in his honour.

King very soon showed she had some special gifts. She had natural sporting ability, and she was bright. The young Billie Jean could have gone to Stanford had her parents been able to afford it but instead went to California State University in Los Angeles.

She had her first tennis lesson at the age of 11 and was so hooked that she bought her first tennis racket for eight dollars, using money she had saved up from odd jobs: “I knew I had found my destiny. I wanted to be the No1 tennis player in the world.”

She has claimed that, by 12, she already saw things she wanted to change, and knew that if she could be No1, people would listen.

At 15, she entered her first US Open, and in 1961, just 17, she played at Wimbledon. That marked the very last time she failed to reach the singles quarter-finals, though she continued to compete at her favourite tournament until 1983. Even so, she won the first of her 14 doubles titles.

By 1963, she had reached Wimbledon’s singles final, and by 1966 she was the champion. In the year she reached out to one girl in England—1967—she won the singles, doubles and mixed doubles at both Wimbledon and the US Open. She went on to win the Australian Open as the year turned to 1968 (one of the rare times she played that event) and then won Wimbledon again.

By the end of 1968, she needed knee surgery (as she would do twice more in her career). That did not stop her playing, in 1970, one of the greatest Wimbledon finals against long-term adversary, Court. It was a straight sets loss for King, but the women played 46 games: 14-12, 11-9. In 1972, King finally added her only French title to further Wimbledon and US Open wins.

Breaking down the barriers

While King was embarking on the road to tennis fame, she was also finding out about the ways of the world. At university, where she was already the most lauded athlete, she met her future husband, Larry King. It was he who pointed out that he had a tennis scholarship, while she did not solely because she was a woman. The campaign for equal rights beckoned.

First, she took on what she called the “shamateurism” accorded the women’s tour, a world where the top players were paid under-the-table fees to grace the major tournaments rather than being paid as professionals.

In 1970, she joined the new Virginia Slims Circuit, the first women-only tennis tour. She helped to form the Women’s Tennis Association (WTA) in 1973 and, a year later, founded the Women’s Sports Foundation dedicated to advancing women’s sports.

As the first WTA president, King threatened to lead a boycott of the 1973 US Open if female players weren’t awarded the same prize money as the men. As a result, it became the first Slam to do just that.

Weeks after the Open, King took the fight for gender equality by the throat in possibly her most famous match, known as the “Battle of the Sexes.” The 55-year-old Bobby Riggs was a former Wimbledon and US Open champion, and had challenged the top female players as a publicity stunt, saying “women just don’t have the emotional stability for the game.”

In May, he had beaten Court in what became known as the “Mother’s Day Massacre.” King had originally turned down Riggs’s offer to play, but after seeing Court embarrassed 6-2, 6-1 by Riggs, she felt she needed to take up his challenge: “I thought it would set us back 50 years if I didn’t win that match.”

Between 1966 and 1975, King and Court had together they won 24 Major singles titles, and despite being like chalk and cheese, they united in this common cause. King studied a tape of Court’s match, and they exchanged notes on tactics.

The match became the most watched—by 50 million—in tennis history, but King noted that not a single sportswriter covering the event was a woman. A couple of days before the match, she told the head of ABC, who had paid $750,000 for the broadcasting rights, that she wouldn’t play if the network used Jack Kramer, whom she believed to be anti women’s tennis, in the commentary box. She won. She also won the match, 6-4, 6-3, 6-3.

King was never afraid to take on the establishment in her professional life, but she eventually had to face it in her personal life too.

She was one of the first professional sports woman to admit she was gay, or rather she was forced out of the closet, in 1981, by the revelations of her PA. The greatest barrier to admitting her sexuality had, it transpired, been her parents. She has talked of her internal conflict:

“One of my big goals was always to be honest with my parents and I couldn’t be for a long time. I tried to bring up the subject but…I was pretty easily stopped because I was reluctant anyway. I ended up with an eating disorder that came from trying to numb myself from my feelings. I needed to surrender far sooner than I did.”

On top of the family conflict, she feared the homophobia that was then widely prevalent: “I had people tell me that if I talked about what I was going through, it would be the end of the women’s tour.” As it was, she estimates that the revelation cost her millions of dollars in endorsements.

King retired from singles tennis in 1984, but even now continues to work to popularise tennis, publicise inequality and challenge prejudice.

She works with long-time friend Elton John on AIDs awareness. She was co-founder of GreenSlam, an environmental initiative for the sports industry. And she still sees discrimination against gay women in the media, and even within the WTA.

It is probably no surprise that she also welcomes technological advances in her sport. The new roof over Wimbledon’s Centre Court, far from being “sacrilege”, is “beautiful…like a functional piece of contemporary art.”

The powerful modern rackets help players in the local park to “feel like they can, even for a few points, hit as cleanly as the pros.”

She’s a great supporter of “hawkeye” technology, both for the fairness it brings to the tennis and the excitement it brings to the fans: “With all of the information, equipment advances and technology…players get better every generation…I would be having so much fun if I was playing today, my personality would fit the modern game!”

Few could predict, in those distant black-and-white days, that King would win 129 singles titles, 12 of them in Grand Slams, nor that she would claim a record-setting 20 Wimbledon titles.

It was impossible to imagine that the prestigious home of US tennis would be named in her honour, or that she would receive the Presidential Medal of Freedom for her work on the rights of women and gays. Now, her worldwide status can be measured by such awards: the Sunday Times Lifetime Achievement Award; the Champion of Justice award from the Public Justice Foundation; the Arthur Ashe Courage Award; and many more.

But whatever had inspired this English schoolgirl was rekindled a couple of years back by a first live encounter at the eponymous US National Tennis Center. King was, as usual, enthusing the public about tennis with a Champions Invitational event.

A crowd spanning the generations gathered around one of Flushing Meadows’ outside courts to enjoy a line-up of Grand Slam champions and finalists, but the star of the show was Billie Jean herself. Looking trim in black tracksuit and trademark spectacles, she sat casually in her team’s corner, the quiet centre of the hubbub—and if I had thought I was the only person in awe of her presence, I was sorely mistaken.

She has been asked what part of her work gives her the greatest satisfaction: “All the off-the-court stuff. After I die, it will still be there, affecting people’s lives.”

Perhaps only now, as I mark a similarly ‘big’ birthday, am I realising that mine was one of those very lives.

ATP player of 2013: ‘Nothing is perfect’, but Rafael Nadal came close