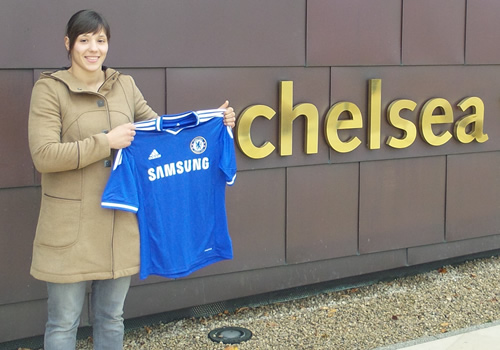 Rachel Williams believes forming a quick bond with her new teammates will be key if Chelsea Ladies are to reach the final of the International Women’s Club Championship this week.

Williams and co landed in Japan on Sunday morning and were greeted with the news they would meet Sydney FC in their semi-final on Wednesday after the Australians beat home side NTV Beleza 1-0 courtesy of a second-half Emma Kete strike.

The England international, who signed from Birmingham City Ladies last month, is one of several new faces in the Chelsea Ladies squad, including another ex-Birmingham player Laura Bassett and Swedish international Emma Wilhelmsson, who is on trial with the Blues.

The new-look Chelsea Ladies squad only have a few days to get to know each other and Williams believes time spent together on the training ground and in the hotel in Okayama will be crucial if they are to reach the showpiece final in Tokyo.

“We’ve got quite a few new players so it’s about team bonding now, working hard and getting to know each other to see how everyone plays,” said Williams.

“It’s so far so good and if we can take this on and in to the game on Wednesday then hopefully we can win.

“The club has backed us really well and this is going to be a good learning curve as for us it is all about making an impact this year. ”

Chelsea manager Emma Hayes oversaw the squad’s first training session in their new surroundings on Sunday afternoon as she sets about gelling her players in to a team capable of reaching the final.

Hayes will rely heavily on the the likes of Ballon d’Or nominee and Japan international Yuki Ogimi – who will captain the side in front of her adoring public – and England trio Eni Aluko, Williams and Bassett for the tournament in the Far East, and so far she likes what she sees.

“It’s a challenge, but a good opportunity for us and a chance to integrate new players in to our way of playing,’ said Hayes.

“We have more winners in the group now and that part of our game will hopefully shine through.

“We are out of season but we want to make the final. That’s our ambition and we believe it is realistic.

“It’s about working in the next few days to beat a top Australian side. We have a full scouting report and will be at our best to beat them.”