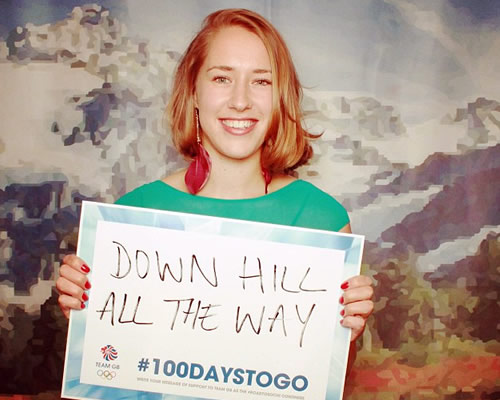 Skeleton slider Lizzy Yarnold banked the third World Cup victory of her career, and the first for 18 months, in Calgary while men’s team-mate Dominic Parsons made the top three for the first time with a surprise bronze.

Yarnold lead going into the second run and was initially disappointed after American rival Noelle Pikus-Pace pipped her to the season opener by just 0.16 seconds.

But within an hour she had been promoted – the fifth World Cup podium of her career – after Pikus-Pace was disqualified for an equipment infringement.

“I’ve got high expectations of myself and I’ve put down two good runs,” said Yarnold, a world bronze medallist in 2012.

“It’s a good start to my first Olympic season, it’s been a long preparation and I’m grateful to the team who have got us here in such good shape.”

Pikus-Pace claimed to be heartbroken by her disqualification and accused the British team of lodging the protest, though they denied this and said the responsibility for the sled inspection lay firmly with the FIBT, skeleton’s world governing body.

Parsons has been promising to deliver at the top level for some time and his third place is Britain’s first World Cup men’s podium since 2010, which was also the last time Britain had a male and female slider on the podium at the same event.

“I’m very happy to be able to pick up this new track for me so quickly,” said Parsons.

“We have a long season to go but it’s a great start and I’m looking forward to racing again and hopefully doing it again.”

Meanwhile, Kristan Bromley – who is looking to secure selection for a fourth and final Olympics – finished 15th and Ed Smith ranked 27th.

The six-strong team will continue their World Cup campaign in Park City, Utah this week – venue for the start of the British skeleton revolution at the 2002 Olympics, when Alex Coomber won women’s bronze.

Muirhead admitted she felt ‘pretty sore’ after a comprehensive 10-5 defeat in the European curling final. The Scottish skip doesn’t have the best of records in European final matches, with three defeats and one victory in the last four years.

But she insists her world champion rink of Anna Sloan, Vicki Adams and Claire Hamilton can take positives from a week that saw them make the final unbeaten, with some convincing score lines and dominant victories.

“This is not the big one and it’s not the be-all and end-all because our preparations are all about Sochi,” said Muirhead.

“We had such a good week, so a gold medal would have been nice but we weren’t good enough, that’s the bottom line and there are no excuses.”

Murdoch, who competes at his third Olympics in Sochi, emerged a 7-6 winner over Denmark, securing bronze in the tenth and final end.

“We know the goal for this season is the Olympics, this week was a stepping stone towards that,” he said.

“We’ve not won the gold but we’ve had some good performances and shown what we are capable of. It’s about maintaining and improving that now.”

Ice dancers Penny Coomes and Nick Buckland won for the third straight time to underline their Team GB selection hopes but there was a shock in the pairs event.

“To win 11 British titles is quite unique,” said McCorkell, who finished a disappointing 29th on her Olympic debut in Vancouver, and was a comfortable winner over nearest rival Karly Robertson.

“I can’t wait for next year now. I’ve approached the season with a totally different outlook this time.”

Oman-born Amani Fancy and Christopher Boyadji, who switched nationality from France earlier this year, denied Stacey Kemp and David King the national pairs title for the first time since 2002.

The couple, who got engaged during the closing ceremony in Vancouver, suffered a time violation for finishing behind their music after Kemp fell and then stumbled out of a triple axel.

“To improve as athletes we had to stick with our game plan and that meant a lot more risk in our routine,” said King.

“We didn’t realise it would cost us the British title but we had to take that sacrifice for the bigger picture.”

Matthew Parr was a confident winner in the men’s event, although Team GB have secured quota places for five skaters in Sochi, competing the women’s, ice dance and pairs competitions.

John Jackson returned to bobsleigh World Cup action in Calgary, defying those who believed his ruptured Achilles injury could sideline him all season.

The Royal Marine and top British driver admitted he was just happy to be back on the track after finishing 21st in the two-man with Bruce Tasker and piloting his four-man crew, who ended last season ranked sixth in the world, to 17th.

Lee Steve Jackson added two Olympic qualifying standards – taking his tally to six – with solid performances at the biathlon World Cup in Ostersund, while Frank Kane added one to his four.

However, there was disappointing news for Sochi hopeful Amanda Lightfoot – the only British women with any Olympic qualifying standards – who missed last week’s action after picking up a virus during the second-tier IBU Cup in Idre.

Lightfoot has been ordered to rest and hopes to resume training in Obertilliach some time this week, with an eye on the IBU Cup there on December 12.

Her absence from this week’s World Cup in Hochfilzen means team-mate Adele Walker has been drafted in to take the British quota place, with Jackson, Kane and Scott Dixon completing the team.

Lancaster backs Yarde to bounce back for England after injury