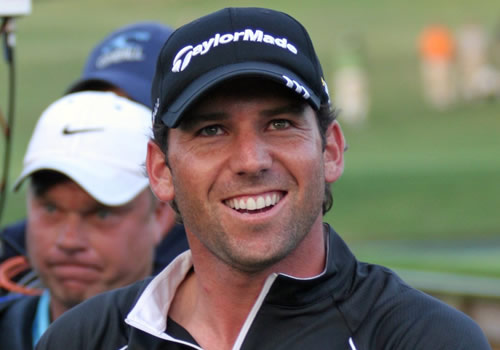 With Nelson Mandela’s funeral taking place on Sunday, the decision was taken to start the tournament a day earlier with the final round being played on Saturday rather than Sunday when the former South African president’s funeral was taking place.

The event was also reduced to 54 holes due to heavy rain over the first three days.

Van der Walt shot a final round of 66 to claim his second European Tour victory of 2013, having won the Tschwane Open in March.

The 30-year-old South African began the day three shots adrift of second round leader, Daniel Brooks, but the overnight pace-setter dropped six shots in the first seven holes on his way to shooting a 76 which left him well off the pace.

An eagle at the 12th and two more birdies on the back nine proved to be enough for Van der Walt to claim victory over Baldwin and Campillo, who had both shot 59s the previous day.

Unfortunately for the two runners-up, their excellent 59s were not counted as the first sub-60 rounds on the European Tour because of the use of preferred lies due to the adverse weather.

In Thailand, Sergio Garcia claimed his first victory of 2013 at the Thailand Golf Championship.

A final round of 68, which included six birdies and two bogeys, helped the Spaniard finish four shots clear of Sweden’s Henrik Stenson.

Although Garcia has come close to victory on a number of occasions, most notable collapsing at The Players’ Championship at Sawgrass, he had been unable to come out on top in 2013.

Garcia had his girlfriend, Katharina, caddying for him over the four days and she will no doubt say it was her influence which helped him get the win. Despite her 100 per cent record on the bag, Garcia has already confirmed that he will be returning to his regular caddy for 2014.

Henrik Stenson did put pressure on Garcia over the first nine holes, but three birdies in a row from the tenth ensured a comfortable victory.

Garcia’s first win since December 2012 was his 21st career victory and was his fourth success on the Asian Tour.

The Spaniard will undoubtedly be looking to become a more prolific winner on tour next season, and while he has previously stated he does not believe he is good enough to win a major, he is more than capable of competing at the highest level.