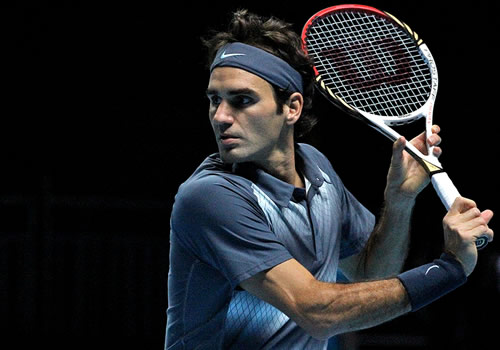 This time last year, the words ‘rest and recuperation’ seemed hardly to have crossed the mind of Roger Federer.

Just a fortnight earlier, the 31-year-old had completed his most successful season in five years, winning six titles from 10 finals. He had played more matches—83 of them—than in any year since his 12-title 2006 season. And at Wimbledon he had won for a record seventh time to take his first Grand Slam title in two and a half years.

In fact, take in the end of the previous season and Federer had won nine titles and 86 matches in the space of only 13 months by November 2012.

The Swiss man seemed to defy the march of time, and was due more than his fair share of R and R… yet instead, he was in the midst of a sell-out South American tour, wowing fans in Brazil, Argentina and Colombia for the first time in his career.

But this December could not be more different. Early plans for another South American tour during the off-season were abandoned, as he explained at the ATP World Tour Finals: “I thought it was important to focus just on practice, on some quiet time. That was the theme for 2013, making sure I don’t overplay, do too many things, don’t travel too much.”

Recognising that 2012 would be a hard act to follow, Federer’s first evolution in 2013 was indeed a trimmed schedule, notably Doha and Miami. And he admitted in Dubai that he needed to “recharge the batteries, work out new goals…get more time on the practice courts.”

Things, though, did not go according to plan. In Indian Wells, he was hit with a back injury that compromised his pre-clay training block, and in his next tournament, Madrid, he fell in his second match. However, worse was to come.

I always see the glass half full. I’m a very positive thinker

At Wimbledon, he made his earliest exit from a Major since 2003, falling in the second round to the 116-ranked Sergiy Stakhovsky, and that brought more evolution. Federer made late entries into close-at-home Hamburg and Gstaad, the first time he had played a post-grass clay event since Gstaad in 2004.

His change of plan, it transpired, was driven not just by a desire for more court time but to make one the most significant changes since he became No1: He played with a different, bigger-headed racket. But although he reached the semis in Hamburg, he lost in the first round in Gstaad, suffering once again from back pain.

Federer’s woes increasingly became the topic of choice through the summer, especially once his 32nd birthday came and went with his withdrawal from Montreal and a slip in the rankings to No5, his lowest in 10 years. Federer had to make fresh decisions, and quickly: The new racket went on ice while he healed his back and rebuilt his confidence for the US Open swing. He explained:

“I will test more rackets again after the Open. It was just a difficult spell I went through in Hamburg and Gstaad when I started playing with the new prototype. And having the bad back, it was just—I couldn’t really get comfortable enough or know about it enough to be quite honest.

“My mind was with my back more than anything else… I’ll go back to the racket I know, the racket I have won everything with, play with that one for these weeks, and then we will look again at the situation after the US Open.”

After a shock loss to another over-30 player, Tommy Robredo, in the fourth round in New York, Federer found himself on the defensive again, fielding questions about his fitness and his desire to keep playing after what was becoming his worst season in 12 or so years.

But he did not waver, insisting in the New York Times magazine: “I enjoy training hard, the travel, I like playing for the history books, and I just like playing on a full centre court in front of the people… I like it all, and I don’t just want to leave.”

There was nevertheless a critical undertow, along the lines of ‘well he would say that, wouldn’t he?’ But while an individual and intensely physical sport such as tennis is unforgiving of any weakness, Federer has invariably been frank, whatever the question. During the US Open, he did not skirt the ‘age’ issue:

“I think you warm up more as you get older… When I was younger, I used to jump up and down for five minutes and then walk on court.

“I have always worked really hard. Never really talked about it, to be honest, but I have put in the hard work so many years, and that definitely keeps my base at a very high level.

“It’s just important when I do feel well that I can also train well and do the right things on the practice court and in the gym, and also for rehab maybe stretching, sleep, nutrition…”

His coach of more than three years, Paul Annacone, talked often of the Federer work ethic, and did so again recently to the New York Times: “In Dubai [before the Shanghai Masters], it’s 125 degrees on court… and I’m watching this guy laughing and having fun, doing drills, doing his physical fitness and I’m thinking: ‘Wow, how does this guy still love to do this this much?’”

It’s an especially natural question of someone who has fought through injury and taken repeated blows to his confidence on the biggest of stages—all the more so after the adrenalin-pumping run of 2012. And Federer admitted, in a recent interview for Credit Suisse, that it had been tough:

“It was a very difficult year. It may have begun well with the semi-final in Australia, and it ended well. But it would be better to forget the months from March to October, despite the quarter-finals at Roland Garros and the win in Halle…

“After [Indian Wells] I fell behind with my training and was unable to catch up again because my back problems soon returned. In the summer, too, it would have been better to have given up in Hamburg and Gstaad. These problems cost me a lot of time and threw me off course.

“But no year is lost. In the circumstances, it was actually an interesting season. It’s no joke being injured, of course, but I had to get through it, I had to question everything. Along with the back problems, I had other setbacks of a kind I had seldom had in the previous 10 years.

“Nonetheless it was an interesting experience—to see how different people reacted, and how I dealt with this situation myself. Sometimes, I could hardly move properly, and yet was sharply criticized by some people.”

Indeed, his questioning and his evolution continued—including an amicable parting of the ways with Annacone. Sure enough, his form began to improve, with a final finish in Basel and semis at the Paris Masters and World Tour Finals, plus his first top-10 wins since the Australian Open.

At the O2 in London, he revealed how he had turned adversity into a learning process—helped not a little by an innately optimistic mindset:

“I always see the glass half full. I’m a very positive thinker. It was important to understand why I had the results I had and why I was feeling the way I was feeling. The moment you get a grip on that, it’s OK.

“As you move along, you gain more information, and maybe new insights you didn’t know before, and as we moved along it became clearer and clearer… and I think that’s why I’ve been able now to have a better grip on things since maybe the summer time, really.”

He admitted last week, in the Credit Suisse interview:
“The end result is good, even though I would have liked to win a tournament. But that would perhaps have been asking too much after such a year. I was able to concentrate again fully on my tennis and on tactics for three weeks, and my body didn’t give me any problems. In the preceding months, that had been different… That boosts my morale for the coming year, and it’s a big relief.”

It was, then, a year that tested Federer to the limit: tested his resolve, his self-belief and his decision-making almost as much as his tennis. By the year-end, he was even able to face Novak Djokovic’s critique of his speed head on:

“What he says is true. But it would also be strange if I could move wonderfully and at my best after a year when I couldn’t train enough and in between times lost quite a bit of my self-confidence. I don’t feel that I am as fast as in my best years, either.

“But despite that, I can still compete with the best. That makes me feel positive. For months, I played while being afraid of back pains and got into bad habits in the process… Now I need time to get all of that out of my system again.”

Part two, coming soon, will look at Federer’s resolutions and hopes for his 2014 season.

WTA player of 2013: Serena Williams proves yet again to be ‘really special’