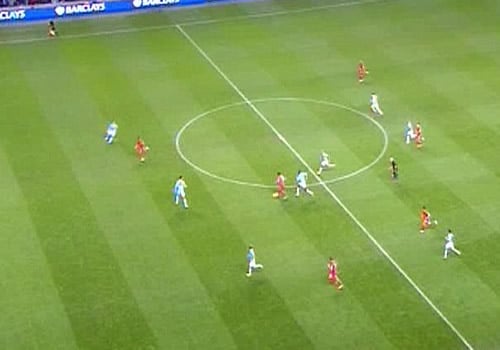 Raheem Sterling was left fuming after being flagged offside when clean through on goal in the first half of Liverpool’s 2-1 defeat at Manchester City on Thursday.

With the score still 0-0, Sterling broke through to score in the 22nd minute, only to be denied by the linesman’s flag at Etihad Stadium.

Replays showed the 19-year-old to have been clearly onside as the pass was played, and Sterling feels the Reds could have gone on to win the game had the correct decision been made.

As a team, we’re really disappointed not to come away with something today

“I looked at the replay after the game and I could see that I was clearly two yards onside,” Sterling told Liverpool’s website. “That was a big chance for us to go 1-0 up in the game.

“We took the lead anyway, but that would have given us another goal advantage.

“With me it’s just about confidence and so coming into the team at such a crucial point, I feel like I’ve just got to step up to the plate really and hopefully provide a few more goals.”

Despite the defeat, which left Liverpool fourth in the Premier League table and three points behind leader Arsenal, Sterling felt that there were plenty of positives to take from the game for Brendan Rodgers’ men.

“This is one of the top teams in the Premier League, so to come away and give such a strong performance just shows the belief in the team that we can go on and achieve things this year,” said Sterling.

“Coming away to Manchester City, we were looking to get a decent result, and we’re not really too happy with losing today.

“We had our chances to win the game – there was my chance at the end as well. As a team, we’re really disappointed not to come away with something today.”