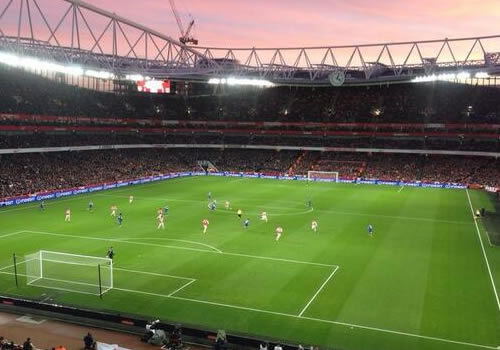 Gerard Deulofeu scored a late equaliser as Everton came from a goal down to earn a point against Arsenal in north London.

After a goalless first half, Mesut Özil gave the Gunners the lead when he tapped home from close range in the 80th minute.

But their advantage lasted just four minutes as substitute Deulofeu’s dipping strike caught out Wojciech Szczesny and earned the visitors a draw.

Sunday’s big game inevitably prompted a flurry of activity on Twitter – and here are our favourite updates, in chronological order as usual.

Ex-Liverpool man Dietmar Hamann (‏@DietmarHamann) is looking forward to the clash: “Should be a great game. Two most in form teams facing each other. The way Everton are going I can see them getting something out the game.”

Former Arsenal midfielder Ray Parlour ‏(@RealRomfordPele) is impressed by the Toffees’ electric start in north London: “Fantastic 1st 10 mins for Everton. Top side. Arsenal back line a little deep at the moment. Wary of Lukaku.”

And so is ex-England international Michael Owen (‏@themichaelowen): “Everton looking very sharp. Barkley could be world class one day.”

Ex-Republic of Ireland man Kevin Kilbane (‏@kdkilbane77) feels that Arsenal are gradually taking the upper hand: “Good 1st half performance from @Everton but @Arsenal having the best 2 chances in the last few mins.”

Arsenal legend Ian Wright ‏(@IanWright0) cannot hide his delight as Ozil fires the home side into the lead: “Oh I love you Mes! #AFC”

And neither can injured Arsenal forward Lukas Podolski (‏@Podolski10): “Yeeeeeeess!! Mesut scoring his 4th of the season, it’s 1:0 for Arsenal!!!!:)))”

Parlour (‏@RealRomfordPele) chimes in again: “That’s the difference this year had to defend well for long periods in that 1st half. Then get the Goal you need. #solid”

Everton youngster Shane Duffy (‏@ShaneDuffy34) is the first to his phone as the Toffees equalise soon after: “Get in!!!!!!”

Midfielder Darron Gibson (‏@D_gibson4) is thrilled for his team-mates: “Get in there Gerry son!!!!”

And Wright ‏(@IanWright0) is heartbroken: “That’s not meant to happen #AFC”

Ex-England international Gary Lineker ‏(@GaryLineker) chimes in after Olivier Giroud hits the post in the dying seconds: “What a strike from Giroud! Terrific end to a game between 2 excellent sides.”

Arsenal’s Emmanuel Frimpong ‏(@IAMFRIMPONG26) looks on the bright side: “Great Effort @Arsenal. Could be a valuable point come end of season”

And celebrity Arsenal fan Piers Morgan (‏@piersmorgan) tweets some post-match analysis: “Just shared a lift at the Emirates with Thierry Henry & Edgar Davids – both purring about Ross Barkley. Brilliant young player. […] We need a striker. Giroud worked hard again but missed a lot of chances. He’s too slow against top class defenders. […] I thought @13Szczesny13 and the back 4 were great today. Midfield looked tired, except for @MesutOzil1088 . And @_OlivierGiroud_ clumsy.”

Everton hero Gerard Deulofeu (‏@gerardeulofeu) is quick to react to the draw: “1-1 against Arsenal! Very happy for the game and my goal. Thank you very much! Come on Toffees”

Ex-Manchester United defender Gary Neville (‏@GNev2) enjoyed the spectacle: “Everton fantastic today. Not seen many do that to arsenal at home particularly the first half! Really good game”

And finally, Arsenal youngster Nico Yennaris (@Nico_Yennaris) adds his thoughts: “Boys were unlucky today, decent point as come up against a very good Everton side. Respect to Martinez! #AFC”

Arsenal 1 Everton 1: That was our hardest game, says Per Mertesacker