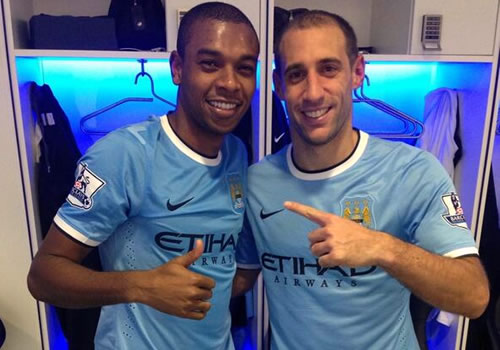 Manchester City underlined their title credentials as they sealed a 6-3 victory over Arsenal to move them three points behind the Premier League leaders.

Sergio Agüero gave the hosts an early lead from a corner before Theo Walcott equalised, but Alvaro Negredo made it 2-1 before Fernandinho further extended the advantage soon after half-time.

Per Mertesacker then made it 5-3 with a header in stoppage time, and Yaya Toure sealed the victory with a late penalty.

Saturday’s blockbuster clash inevitably prompted plenty of activity on Twitter – and here are our favourite updates, in chronological order.

Golfer and Arsenal fan Ian Poulter ‏(@IanJamesPoulter) is stunned by the opening exchanges: “The start of this game is crazy fast. And city look to have the upper hand. Come on Arsenal.”

Ex-Valencia man Gaizka Mendieta ‏(@GaizkaMendieta6) reacts as Wilshere misses a good chance to put Arsenal ahead: “@JackWilshere those chances in these kind of games…you HAVE to score! #MCFCvAFC” …before Aguero fires home: “Just because @aguerosergiokun will do !!! #MCFCvAFC”

Poulter (‏@IanJamesPoulter) chimes in again after Negredo makes it 2-1: “Man City look really really strong. Hate saying it but they are very good. Arsenal not picking up on set pieces. Too dangerous.”

Ex-Liverpool man Dietmar Hamann (‏@DietmarHamann) is not impressed by City’s No1: “Joe Hart better gets himself ready for next week.Pantillimon at fault for both goals.”

Ex-Cardiff striker Jay Bothroyd (‏@jaybothroyd) feels Wilshere has had a poor game: “jack wilshere is a great player now and for the future but on current form he wouldn’t get into my arsenal team.”

Gary Neville (‏@GNev2) keeps it short and sweet after the final whistle: “Ominous!”

Ex-Arsenal defender Lee Dixon ‏(@LeeDixon2) puts the result into perspective: “No option. You watch the tape,you try to learn something and you see who is next. That applies to winning and losing”