Novak Djokovic, Andy Murray and Roger Federer are already well into their preparations for the 2014 season 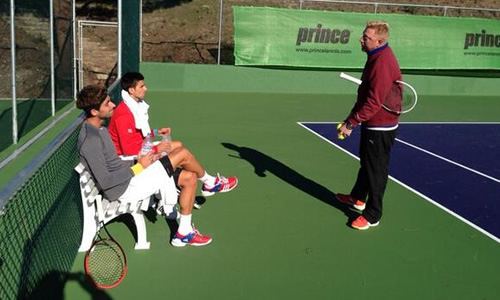 While northern climes wrap up presents and wrap up against winter weather, the elite on the tennis circuit will see Christmas come and go in a haze of training, practice and warm-up tournaments in hotter, drier locations.

And as 2013 gives way to 2014 with barely time to draw breath between one season and the next, many of those top players plan to “ring in the new” in the company of some unexpected colleagues.

The announcement of the German’s recruitment to one of the most close-knit squads on the tour surprised even the best-informed pundits, but Becker’s explanation of the Serb’s reasoning was almost as surprising:

“The fact that Rafael Nadal has taken over the No1 ranking and Andy Murray has moved up a gear, [Novak] felt he had been left behind a little bit… He was very impressed with the level of Murray’s relationship [with Lendl] and the comeback of Nadal. He felt he needed someone in his corner who had been there and done what he’s trying to do.”

It transpires that Djokovic approached Becker almost as soon as Nadal had taken over the No1 ranking in October. Despite his reaching the finals of 10 of the last 13 Grand Slams, Djokovic had seen his chief rivals—Nadal, Murray and Roger Federer—claim all but the two Australian Opens since his remarkable 2011 season of 10 titles and three Majors. Becker, Djokovic has decided, could kick-start his next Major-winning phase with the same kind of objectivity and inspiration that Lendl brought to Murray.

It is a bold move, one that will be tested first at the $250,000 six-man exho event, the Mubadala World Tennis Championship in Abu Dhabi, which launches the campaigns of the top four men in the world: No8 Stan Wawrinka and No10 Jo-Wilfried Tsonga complete the impressive line-up. Djokovic is defending champion, and just as last year, will leap-frog straight from Abu Dhabi into the defence of his Australian title.

For Murray, also playing in Abu Dhabi, the warm-up tournament is even more important. He has not played a competitive match since the middle of September when he left the tour for back surgery.

As always, his off-season training camp has been in the 30-degree heat of Miami where he has made his steady recovery and recuperation. He bypassed the BBC Sports Personality of the Year event in the UK, as well as the scheduled Dream Cup exhibition event in Barbados, to focus entirely on his training—promising to work even on Christmas Day.

He has been reticent about his prospects for the Australian Open before he has some competition under his belt, and that will come in Abu Dhabi on Boxing Day, when he is scheduled to face Tsonga in his first-round match.

Tsonga, too, is looking to rebuild his fitness and ranking for the start of the Australian swing. The Frenchman missed most of late summer and autumn with knee injury and slipped to No10 in the rankings by year-end.

He too decided to shake up his coaching profile, parting ways with Roger Rasheed in August. Now ranked at his lowest in more than two years—No10—Tsonga plans to start 2014 with two compatriots, Nicolas Escude and Thierry Ascione, as his coaching duo. He is scheduled to go in hard and fast, too, backing up Abu Dhabi with a Hopman Cup appearance a couple of days later.

Tsonga is not the only Frenchman to start the New Year with a new ranking and coaching set-up. Richard Gasquet ended 2013 with the most titles since 2006 and at his highest ranking since 2007, No9. He also reached his first Grand Slam semi since that same year and qualified for the ATP World Tour Finals, but had a sudden parting of the ways with his coach, Riccardo Piatti, during the tournament. It did not take him long, though, to link up with two-time Roland Garros champion, Sergi Bruguera, who will share coaching duties with Sebastien Grosjean.

The biggest surprise in the coaching merry-go-round, though, came this week. The 31-year-old David Ferrer, who begins 2014 at a career-high ranking of No3, separated from his coach of almost 15 years, Javier Piles, despite reaching his first Grand Slam final—the French Open—in 2013. As he embarks on his 12th year of Grand Slam competition, his 45th consecutive Major, he will have a new coach at his side for the first time in his professional career: Jose Altur.

Not that there is any sign of a change to Ferrer’s intense schedule: He goes from Abu Dhabi to the first ATP event of the season in Doha and then to the antipodes to defend his Auckland title.

As for Federer, who begins a season outside the top four for the first time since 2003, he has also been making changes—and plenty of them, despite being the elder statesman of the top 10. He is approaching his 57th consecutive Major at the age 32.

Last week, Federer revealed on Twitter that he had invited Stefan Edberg to train with him for a week at his usual base in Dubai. What’s more, the six-time Grand Slam-winning Swede, the archetype for the serve-and-volley, single-handed style of tennis, has since done nothing to dampen conjecture that the tie-up might become a more permanent one.

Federer is clearly determined to hit the ground running in 2014 after repeated back problems contributed to one of his most disappointing seasons. He was in training fewer than two weeks after the World Tour Finals. What’s more, in a recent video of that training, he was shown to be using the new racket that first got an airing after his Wimbledon exit.

Whether Federer will take the bigger-headed racket with him to launch his assault on 2014 remains to be seen, but it would be no surprise to see him give it a trial run ahead of Melbourne. For in another new departure, he is making a first-ever appearance at the Brisbane 250.

And what of the world No1? Just 12 months ago, Nadal had not played a competitive match for six months, delaying time and again his return from knee injury.

He would play no part in the opening month of 2013, either, but when he did come back—first to the South American clay—it was with the biggest of bangs.

With 10 titles and 75 match-wins in the space of 10 months, there are clearly few problems on the coaching front for Nadal. He is, of course, also in the happy position of having no points to defend up to and including the Australian Open, so his ranking will not be on the line for a while yet. So why worry about fixing something that is not broken? Instead, he has done some tennis exhos in South America, a charity poker tournament, and returned home to enjoy the usual early family Christmas.

Nadal’s season begins with Murray and Djokovic in Abu Dhabi, and is followed by Doha. And bearing in mind his remarkable results on the hard courts during 2013, he may well have Melbourne firmly in his sights: It is the only Grand Slam he has not won twice.

Who plays where ahead of the Australian Open