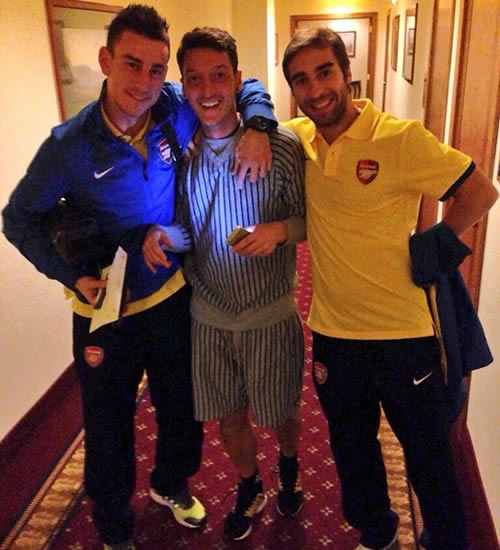 Arsenal appear to be in relaxed mood heading into Wednesday’s crunch Champions League clash with Napoli.

After arriving in Naples on Tuesday, striker Olivier Giroud took some time out to poke fun at Mesut Ozil about his dress sense in the team hotel.

The Germany playmaker appeared to be wearing a pyjama-like outfit as the Gunners geared up for their Group F showdown with the Serie A side.

Giroud, defender Laurent Koscielny and midfielder Mathieu Flamini were on hand to question the 25-year-old’s loungewear.

The France striker posted the picture above, along with the message: “We love your “pyjamas” Mesut @MesutOzil1088″.

Arsenal will top their Champions League group if they avoid defeat against Rafael Benitez’s men at the Stadio San Paolo.

Ozil has scored four goals and made six assists in the Premier League since joining Arsenal from Real Madrid in September.

Speaking ahead of Wednesday’s clash, Koscielny insisted that the Gunners will go all out for the win in Naples.

“After [losing] to Dortmund at home, it was important to play to win in Dortmund,” said Koscielny. “It was very difficult to win in Germany, because last season they were in the final of the Champions League.

“Napoli are a good team and very hard. We want to finish in first place in the group, so we need to win here.”