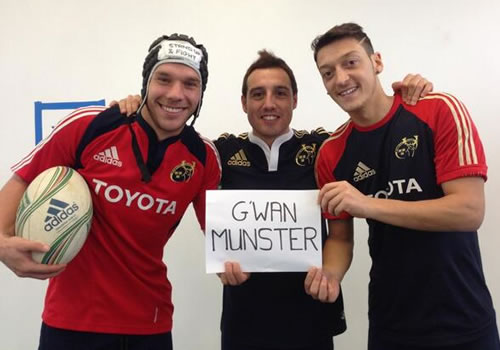 Arsenal stars Lukas Podolski, Santi Cazorla and Mesut Ozil have shown their support for Munster as they bid to take control of Heineken Cup Pool Six with victory over Perpignan in France on Saturday.

Podolski posted a picture of the Gunners trio sporting Munster tops and holding a message reading “G’WAN MUNSTER” on Friday afternoon ahead of Arsenal’s trip to Manchester City on Saturday lunchtime.

It is not the first time that Podolski and Cazorla have shown their appreciation for a team from the province of Munster.

The Arsenal duo posed with hurleys and the message “UP THE BANNER” in another tweet back in September.

It is understood that that Arsenal first-team physio Declan Lynch, who played rugby for Shannon and worked with the Ireland Under-20s and London Irish, is the inspiration behind the photos and tweets.