2013 tennis best bits: Marianne Bevis takes a look back at some of the talking points and headlines from the WTA season 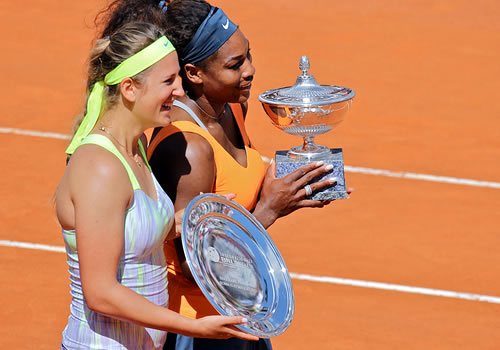 The very first Grand Slam of 2013, the Australian Open, marked the launch of particularly special year for women’s tennis.

Ahead of the semi-finals, appropriately enough on Ladies’ Day, Tennis Australia honoured the 40th anniversary of the Women’s Tennis Association (WTA), the prelude to a celebratory season-long campaign under the banner 40 LOVE.

The kudos enjoyed today by the women’s tennis profession had its seeds in 1970, when nine players signed $1 contracts to compete in the new Virginia Slims Series.

One of the key figures among the “Original 9”, Billie Jean King, would lead the campaign all the way to the Gloucester Hotel in London three years later, during the week before Wimbledon. There and then, 63 female players created the WTA.

King has remained a force for equality and for women’s tennis ever since, and featured in many of 2013’s headlines. Her reaction? “Has it really been 40 years?”

She explained: “What started as a few women and a dollar has grown to thousands, living the dream—our dream. We were athletes who wanted to compete, and along the way we made history, determined to win, not just for ourselves, but for women everywhere. We’ve come a long way, baby.”

They certainly have. Prior to the WTA’s formation, the annual prize money available to female tennis players was close to $2 million. Today, 2,500 players from 92 nations compete for $118 million.

On the anniversary of that London meeting, King and 16 other former No1s, returned to capital during Wimbledon to reminisce. Key among them was Martina Navratilova, owner of 18 Grand Slam singles titles, who played her very first Wimbledon that same summer of 1973—the first of 22 consecutive singles appearances at the Championships.

Navratilova, herself a strong campaigner for equal rights since those heady days, commented: “My first Wimbledon was 1973 and I had no idea what an association even was. Billie Jean had the foresight to know what was best for us.”

Margaret Court, winner of 24 singles Majors and semi-finalist at that same Wimbledon, was also in London for the celebration, but 40 years ago, it would be King who held aloft the 1973 Wimbledon trophy. Could it have been any other?

The world at Williams’ feet

Where better to begin this pictorial trip through the 40th year of the WTA than with the present No1 and outstanding woman of the current generation. Serena Williams led the tribute to King in London: 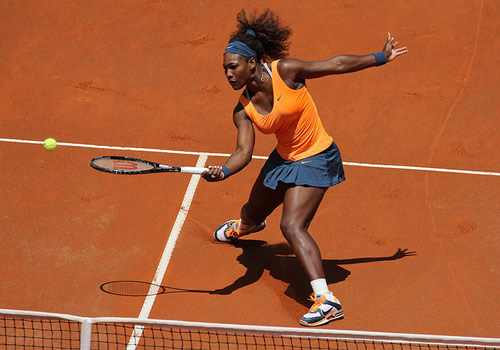 “None of this would be possible if Billie Jean hadn’t taken a stand for women’s tennis. Being No1 is great, but fighting for the generation to come is even better for me. That’s something that I think Billie Jean was able to do.”

Williams, now aged 32 and the oldest ever women’s No1, enjoyed one of her best ever seasons in 2013. She lost only four matches out of 82, won 11 titles, her first French Open in a decade, her 17th Major with the US Open title, and her fourth WTA Championship—12 years after the first. No surprise, then, that she once again picked up the WTA’s Player of the Year Award.

For the third consecutive year—and she is still only 24—the all-court craft and intelligent tactics of Agnieszka Radwanska charmed tennis fans into voting her their favourite. Not content with that, she won the Fans’ Favourite Shot, too, for a ridiculous reflex winner at the net in Miami. 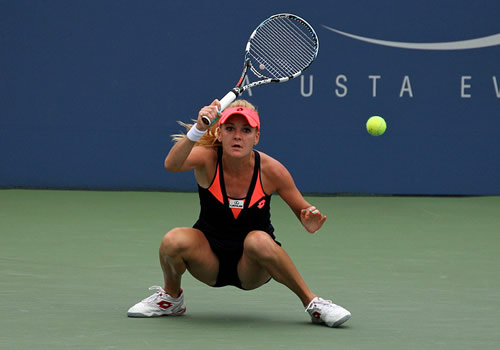 The brunette-turned-blond-turned-brunette could not quite regain the No2 ranking she reached after her final run at Wimbledon in 2012—though she reached the semis—but it is her nimbleness, her variety, her unconventional solutions, and her calmness under pressure that capture the imagination, whatever the colour of her hair!

She has bucked the system—not least in her homeland of China—and bucked the trends. Na Li did not win a Grand Slam until almost 30, took a university degree along the way, entertains as much with her wit and charm as with her rounded, crisp and chess-precise tennis—and still she improves. 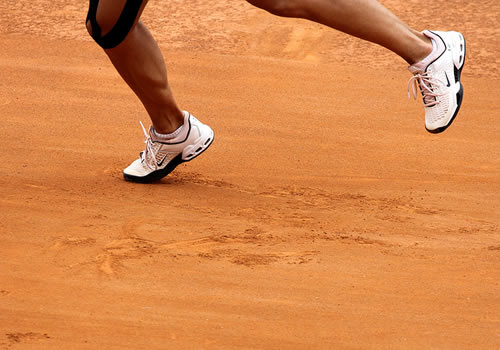 Li’s is amongst the tour’s most balanced footwork—and she has perhaps the most recognisable knees!

Not content with being the most famous, and most wealthy, athlete in China, she took on one of the toughest coaches around, Carlos Rodriquez, to get even better—and it worked: Li stands at a career-high No3, the highest ever by an Asian tennis player.

Her success and her personality have helped to open up the biggest untapped market in tennis, and now tournaments are springing up throughout China and the Asian region—surely one of the biggest changes over these 40 years of WTA history.

When it came to the WTA Doubles Team of the Year, the award went to the delightful Italian duo of Sara Errani and Roberta Vinci. 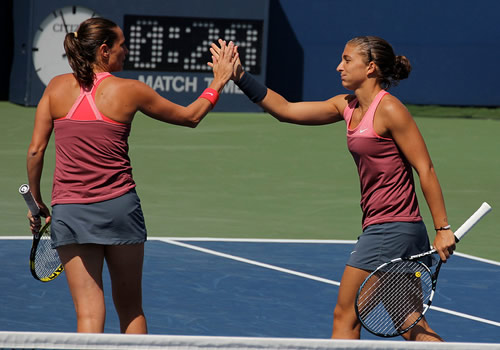 Before 2013, these two best friends already had 13 doubles titles together, including their first two Grand Slams at the French and US Opens last year. But it was not until this year that they became joint No1s, in April, and they have not let anyone else into the picture since.

Errani and Vinci are not just doubles experts: Errani is No7 in the singles rankings and Vinci No14. Indeed it was their singles victories that took Italy to the Fed Cup title last month—their doubles prowess was not required. But their doubles success is, they insist, down to their friendship: “It’s because we are best friends outside the court. It’s a very important thing to be good friends with your doubles partner…that’s very important when you’re playing together as a team.”

Indeed looking at them on court, they could be sisters rather than friends, just as one of the teams to beat the Italian duo in 2013 was—name of Williams.

When it comes to style….

…there really are few who can do it like the Williams sisters. Not content with being two of the finest singles players of the 40 LOVE era, Serena and Venus—now with a combined age of 65—have joined forces to win 13 Grand Slam doubles titles since their first in 1999. Sickness and injury have prevented them playing more than around half of the available Majors in the interim, yet still this year they reached the quarters in Australia and the semis at the US Open. 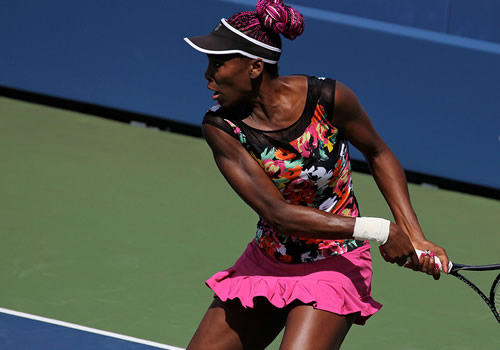 Venus, in her ‘spare’ time, runs her own fashion line, and her stunning pink and black ensemble in New York was one of the outfits of the year. Needless to say, her nails matched perfectly, but it was her hair that capped the outfit, with her braids coiled in a gravity-defying knot and also shot through with pink. Stunning.

Queens of the court

Victoria Azarenka and Serena Williams topped the WTA rankings from the Australian Open to the year’s end, with Williams taking over the top spot in mid-February—despite losing to Azarenka in the final. 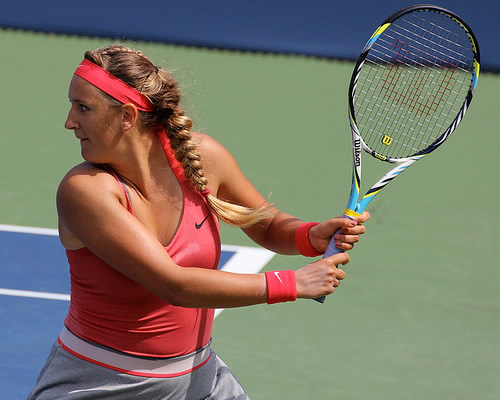 In what is becoming the biggest rivalry on the women’s tour, they would go on to play in three more finals, splitting their wins at two apiece: Azarenka also took the honours in Cincinnati while Williams won in Rome (pictured) and at the US Open. Three of the four matches went to three sets and involved at least one tie-break, and both women ended the season in the all-time top-10 list for weeks at No1.

Their first meeting of 2014—though it actually begins before 2013 is quite over—is scheduled to be the warm-up event for the Australian Open, the Brisbane Premier. It’s the tournament that marked the first of 11 titles for Williams this year, though the scheduled meeting with Azarenka was dropped courtesy of a walkover by the then top seed from Belarus.

Even if Azarenka wins this time, and then defends her title in Melbourne, she has no hope of closing the 5,000-point gap with her rival. She must look well into the clay season before she can get Williams in her sights again, by which time the third in the power-struggle for the top, Maria Sharapova, should be back from injury.

It has become a familiar pattern for British No1 Laura Robson, a season of thrilling highs and unexpected lows. 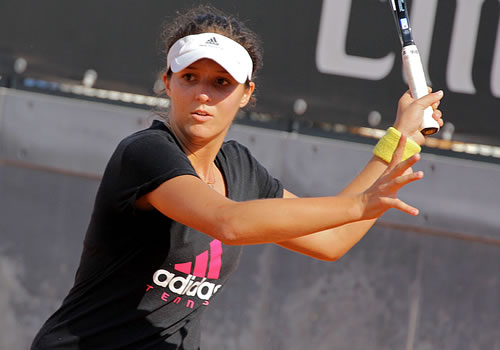 She opened in Australia with her latest Grand Slam scalp in Petra Kvitova, only to win just two matches in her next seven tournaments. Madrid saw her beat world No4 Radwanska and in Rome she faced first one Williams sister—beating Venus with ease—before losing to Serena with just as much ease. Wimbledon brought victory against No10 Maria Kirilenko, but then Robson won just six more matches in the year.

It was a similar pattern with her coaching set-up. During her spring dip, she separated from Zeljko Krajan and took up with Sven Groeneveld, one of the Adidas Player Development team, and Lucie Ahl from the Lawn Tennis Association. She said in Rome:
“I have really good help at the moment with Sven and Lucy…I haven’t even thought about a replacement yet—probably not until after Wimbledon.”

But after a first-round exit from the French Open, she announced a trial period with Miles Maclagan, reached the fourth-round run at Wimbledon and a career-high ranking of 27. But another dip in form brought another parting of the ways. With a year-end ranking of 45, she has now joined forces with Jesse Witten and Nick Saviano, at whose academy in Florida she is based for her off-season training block.

Robson turns 20 during the Australian Open, and her world-wide band of fans will hope that this time the elusive ‘fit’ is one that brings consistency to her giant-killing talent.

World No1 back in 2008, Jelena Jankovic had struggled of late to maintain her top-10 form, and began 2013 at No22. By the end of the year, she had not just qualified for the WTA Championships but reached the semis, and took Serena Williams to three sets. She ended her season at her highest year-end ranking, No8, since 2010. 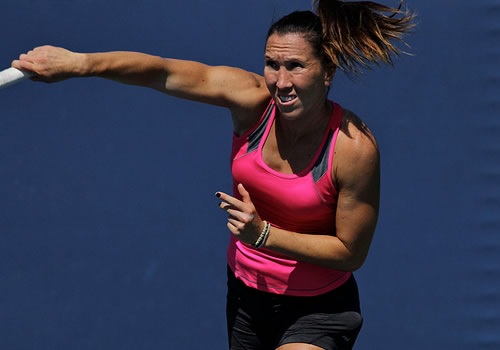 The resurgence began in Bogota, where Jankovic ended a three-year title drought, and she went on to reach the finals of Charleston and the prestigious Beijing Premier, the semis in Miami and Cincinnati, and the quarters of the French Open. She put much of the turnaround down to her brother, now her coach: “He came on the road with me. We worked very hard, as well with my hitting partners and my team, and I just kept working every day.”