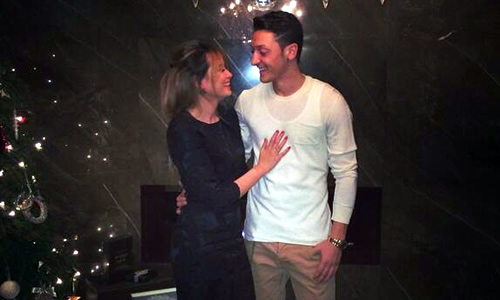 Rio Ferdinand and Mesut Ozil led the Christmas Day messages on Twitter ahead of a busy schedule of Premier League action on Thursday.

And in a special festive treat for The Sport Review’s readers, we bring you a selection of the best of the Twitter messages from some of sport’s biggest names on Christmas Day.

Arsenal club-record signing Mesut Özil (@MesutOzil1088) will be spending the day with his loved ones: “My lady and I wish you a beautiful Christmas.”

Former Republic of Ireland midfielder Matt Holland (‏@mattholland8) remembers those hit by the adverse weather in the United Kingdom and Ireland: “Seriously feel for all those affected by the floods and power cuts. Hope the magic of Christmas can find its way to you in some way.”

Manchester United defender Rio Ferdinand (‏@rioferdy5) lifts the lid on the average Christmas Day for a Premier League footballer: “Merry Xmas world! En route to training….been up since 5am….my little ones have been going nuts ever since! My afternoon nap is now vital!”

QPR midfielder Joey Barton (‏@Joey7Barton) was up before his kid to open presents before training: “It’s not normal that I’m am waiting for my child to wake up on Christmas morning. Gonna have to leave for training now.”

Newcastle United defender Tim Krul (‏@TimKrul) issues a weather warning of his own: “Merry Christmas everyone. Be careful on the roads dangerously slippy out there this morning…”

Ex-Liverpool midfielder Jason McAteer (‏@MCATEER4) even wishes his trolls a Merry Christmas: “Merry Christmas – even to the ones who got a little abusive this year!”

There was some shameful plugging by England legend Gary Lineker (@GaryLineker): “Merry Crispmas all.”

And finally, Liverpool legend Robbie Fowler ‏(@Robbie9Fowler) remembers those who have passed away during the year: “Hope you all have a fantastic Christmas, raise a glass to all those who sadly can’t be with us….xx”

The Sport Review would like to wish all of our readers a Merry Christmas and all the very best for the new year!