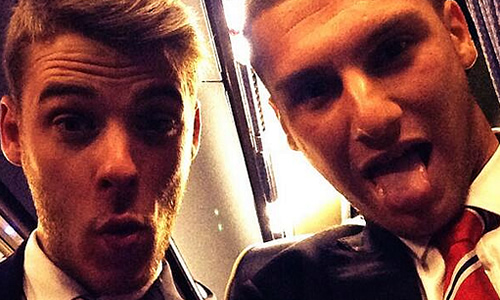 Manchester United set up a League Cup semi-final clash with Sunderland after a battling 2-0 win at Stoke City on Wednesday.

After a weather-interrupted first half, Ashley Young made the breakthrough with a ferocious 62nd-minute strike, before Patrice Evra curled home a brilliant second.

Meanwhile, West Ham booked a last-four clash with Manchester City after coming from behind to beat Tottenham at White Hart Lane.

A busy night of League Cup football prompted a flurry of activity on Twitter. Here is the best of the reaction to both games.

Former United goalkeeper Edwin van der Sar (‏@vdsar1970) is impressed by Evra’s well-taken second goal, which puts the game to bed: “When did Patrice Evra learned to score like that with his right foot!! Wow never seen this in my time @ManUtd @CapitalOne_Cup”

Injured United midfielder Michael Carrick ‏(@carras16) is too: “Oh Pat.. What am I seeing?? Caressed with that sweet right foot.. Great goal”

Stoke goalkeeper Thomas Sorensen ‏(@TSorensen1) thanks the home fans after the loss: “Gutted with the result but we gave everything on difficult night. Thanks for the great support #PotterNation”

And Sky Sports pundit Chris Kamara (‏@chris_kammy) gives us his full-time view: “2-0 to The Moyes Boy’s. Stoke had a go but United’s finishing did for them, next up the draw for the Semis”

Meanwhile, the reaction from White Lart Lane filters through, and Lord Sugar ‏(@Lord_Sugar) is not happy: “So disappointed with another home loss. Wasn’t there don’t know why we lost, too many injury’s with out defenders. Shame for Sherwood”

Former heavyweight boxer Lennox Lewis ‏(@LennoxLewis) is delighted for the Hammers: “Big up to West Ham for big win 2-1 at Tottenham! Booked their place in the League Cup semi-finals #WHUFC”

And finally, midfielder Matt Taylor ‏(@Official_MattT) is ecstatic after helping his side to victory: “What a fantastic performance and result from the boys… Absolutely buzzing….. #COYI”