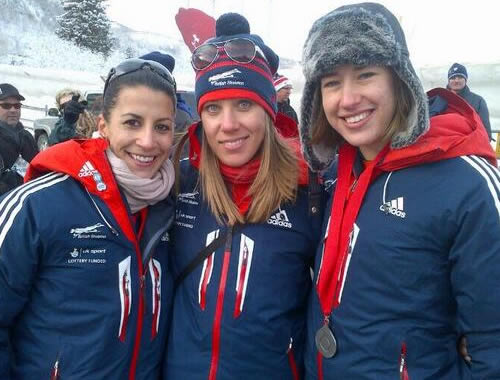 Yarnold finished just behind veteran American slider Noelle Pikus-Pace, who was racing on her home track in Park City, Utah.

But she hopes the advantage might be with her for this week’s two races at Lake Placid, the venue where she won bronze at the 2012 World Championships.

“I’m delighted with my performance, we are racing every week and to expect to make the podium every time is a tall order,” said Yarnold, who finished fourth at last year’s World Championships.

“It’s only my third time on the Park City track so I’m chuffed to retain the yellow jersey for the second week.”

British team-mate and world champion Shelley Rudman continued her solid start to the season with another top five finish in fourth and Dominic Parsons, fresh from his maiden World Cup podium in Calgary, finished tenth in the men’s race.

Elsewhere, Rose McGrandle is pushing her credentials to be in selectors thoughts when they review their World Cup squad later this month.

She won both the Intercontinental Cup races in Igls last weekend, twice lowering the track record at the Austrian venue.

“I broke the track record in training so I knew I had the possibility of sliding fast,” said McGrandle.

“But all the girls were posting some impressive times so it put the pressure on me to piece it all together and stay focussed.

British bobsleigh driver John Jackson gave his confidence a boost with a solid eighth place in the four-man event in Park City.

Jackson, who finished fifth at last year’s World Championship and ended the season ranked sixth in the world, is still recovering from an Achilles injury that meant he spent most of the summer on crutches.

Pushing into the top ten is a major boost, while British women’s driver Paula Walker – alongside brakewoman Rebekah Wilson – also claimed eighth position in her two races in Utah.

Gillings progressed through the heats but a bad lane draw didn’t aid her bid for a first World Cup podium since March 2012.

“Fifth was a solid start to this Olympic season, obviously I would have liked to have medalled but I am happy none the less,” she said.

“I’m really looking forward to the next race in Lake Louise, Canada in two weeks time.”

Sarsfield missed the 2010 Games in Vancouver after tearing knee ligaments and fracturing a femur and tibia in a crash and needs to be ranked inside the world’s top 32 in January to be considered for selection.

She later blamed a minor mistake at the bottom of the course for costing her a place in the quarter-finals.

Ahead of the start of their World Cup campaign, British freestyle skiers were competing in the North Face Park and Pipe competition in Colorado.

Halfpipe specialists Em Lonsdale and Rowan Cheshire finished 11th and 15th in the women’s event while Murray Buchan ranked 15th in the men’s.

However, Sochi hopeful Pete Speight had a weekend to forget, breaking his collarbone after fall while team-mate James Machon returned to action for the first time.

Alpine skier TJ Baldwin finished 65th in the World Cup downhill on Beaver Creek’s famous Birds of Prey course and improved that position to 50th in the super-G.

Elsewhere, in cross country skiing, Posy Musgrave edged towards the world’s top 100 in the sprint classification with a ninth place in a FIS competition in Seefeld.

Meanwhile, at the the World Cup in Lillehammer, Andrew Musgrave finished in 58th and Andrew Young 74th in the 15km race.

British luger Adam Rosen qualified through the Nations Cup for his second World Cup race of the season in Whistler, ranking 27th.

And elsewhere, Adele Walker missed a top 100 finish in the 7.5km sprint at the biathlon World Cup in Hochfilzen while the British men’s team of Lee-Steve Jackson, Kevin Kane, Marcel Laponder and Scott Dixon had a disappointing day in their relay appearance.