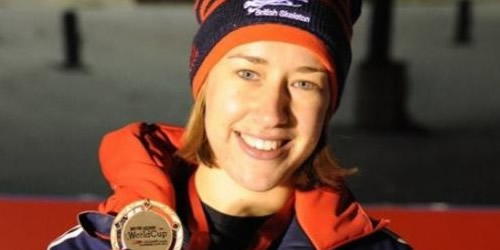 Lizzy Yarnold has a double reason to celebrate this holiday season but she’s politely telling Christmas to get stuffed in pursuit of the present she really wants – Olympic gold in Sochi.

The British skeleton slider heads into the mid-season break ranked number one in the world after four consecutive podium performances on the World Cup circuit in north America, including another gold and a bronze this weekend in Lake Placid.

“Of course I am pleased with how things have gone so far, but we are only four races in and there are so many talented and experienced sliders I am competing against,” she said.

“I need to keep working hard and focusing on each race as it comes. I can’t wait to get home and see my family but will be in the gym everyday as usual, as long as it’s open on Christmas Day I’ll be there.

“Having three weeks of races back to back is physically very demanding so the day off in between the two races was needed this weekend.

“It showed in my performance. I felt refreshed and even when the race was disrupted due to the weather [the race only contained one run after the conditions delayed the start], it was good practice for me to try and focus on my race and not what was going on around me.

“I was really happy on the whole with how I’ve raced at Lake Placid. It is a hard and technical track and after the first run on Friday I was lying in seventh – but I was determined to keep fighting and had a better second run which pushed me up into the bronze medal position.”

Yarnold was particularly pleased with her performance at the start, with her push times underlining her podium performances of recent weeks.

“Those milestones are really important for my progression, my coaches and I had identified that as one of my goals for this race so it is another learning I can take forward for the rest of the season,” she added.

Yarnold is currently ranked number one in the world but world champion and 2006 Olympic silver medallist Shelley Rudman has been equally consistent – and is just one place behind.

British team performance director Nigel Laughton will now review the opening races of the season before confirming his squad for a series of European races post-Christmas, which will define his Olympic selections and the number of quota places British sliders will qualify.

Rose McGrandle is pushing hard for recognition, after more encouraging performances on skeleton’s second tier Intercontinental Cup circuit, adding to double gold in Igls recently with a third and fourth in Altenberg.

In the men’s rankings, Dominic Parsons’ maiden World Cup podium in the first race of the season in Calgary means he heads into the New Year ranked seventh in the world.

British Bobsleigh performance director Gary Anderson has been talking a lot about the trajectory of performance towards Sochi – but few thought John Jackson’s four man crew would be World Cup podium so soon.

And the driver is still not pushing at full capacity following his Achilles injury.
“I’m just really proud of the guys,” said Anderson, who remains hopeful of a first British bobsleigh Olympic medal since 1998 next year.

“It’s all about getting it right in Sochi but our trajectory looks good.”

Emily Sarsfield followed up on her 24th in the ski cross World Cup opener with a 30th place in the second event of the season in Val Thorens while Ed Drake and Pete Whelan ranked 46th and 49th in the men’s event.

Snowboarder Adam McLeish started his winter campaign with a 36th and 41st in the parallel giant slalom and parallel slalom in Carezza, Italy while aerials specialist Harry Gillam commenced his World Cup season with a 24th in Beida Lake, China.

World silver medallist James Woods declared himself satisfied with a sixth place in the ski slopestyle event at the Dew Tour in Breckenridge while Aimee Fuller and Rowan Cheshire ranked seventh in the snowboard slopestyle and ski halfpipe respectively.

Adele Walker just missed what would have been her first Olympic standard and will now race on the IBU circuit next year.

Luger Adam Rosen missed qualifying for his third World Cup race of the season after ranking 18th in the Nations Cup in Park City. At the mid-season break he is ranked 35th in the world.

Meanwhile, Team GB confirmed that Jenna McCorkell, Stacey Kemp and David King and Penny Coomes and Nick Buckland will all make their second Olympic appearances in the women’s, pairs and ice dance figure skating in Sochi.

In addition to their individual events, all compete will in the new-look team competition, where they will be joined by men’s skater Matthew Parr.