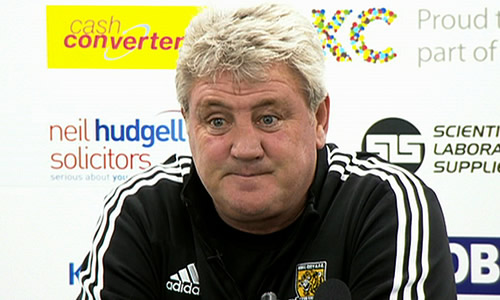 Steve Bruce has challenged his Hull City side to claim a positive result when they take on high-flying Arsenal at Emirates Stadium on Wednesday.

The Tigers head into the clash on the back of their first-ever victory over Liverpool after claiming a memorable 3-1 win on Sunday.

And Bruce is confident that his side can trouble Arsene Wenger’s Premier League leaders.

We can’t afford to have an off-day, we’re going to have to be at our best

“We’ve shown when we’ve been to the likes of Chelsea, Manchester City, Newcastle, Everton and Tottenham that we’ve made a fist of it,” said Bruce.

“We maybe haven’t got the right result in those games but I think we have to approach [this] game in the same way. Let’s go and have a go, enjoy it and see what we can do.”

He continued: “You know, when you go to Arsenal, that the one thing you’re going to have to do is defend well and play well because they are as good as anybody in this league at the moment,” he added.

“It’s so difficult to set up against them because the players seem to play anywhere and everywhere. They play with that fluidity and freedom.

“There’s a goal threat from five or six players. We can’t afford to have an off-day; we’re going to have to be at our best.”

Michael Dawson urges Tottenham to continue to stick together