World Cup 2014 ball: Adidas unveils the 'Brazuca' ahead of next summer's tournament in Brazil 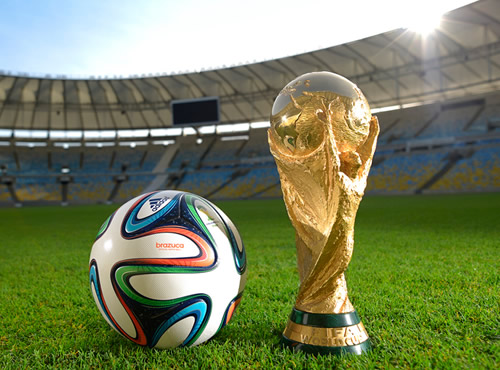 Brazuca, the official matchball for the 2014 World Cup Photo: adidas

The official ball for the 2014 World Cup has been launched, with manufacturers adidas hoping that the Brazuca does not come in for the same level of criticism as its 2010 offering.

The Jabulani ball was widely criticised by players during the tournament in South Africa three-and-a-half years ago, despite the sportswear company insisting it had been rigorously tested.

Adidas maintain that the Brazuca, which means ‘Brazilian’ and refers to the Brazilian way of life, is the most-tested adidas ball in history.

The new ball has already made a splash on Twitter, too, attracting over 60,000 followers since its official launch on Tuesday and interacting with the likes of Gary Lineker.

“The Brazuca has a stunning design that feels inspired by Brazil,” said Real Madrid goalkeeper Iker Casillas. “Now the ball has been launched, the tournament feels a lot closer. I’m looking forward to playing in Brazil with a great ball.”

Barcelona full-back Dani Alves added: “My first impression of the Brazuca is of a ball that is fantastic, and we’re going to have a lot of fun with it. adidas has created an incredible-looking ball fitting for a tournament as big as the World Cup.

“Most importantly, it plays well on the ground and in the air. I’m sure all the players will love it! It’s increased my levels of excitement even further and I honestly can’t wait for the opening game!”

The Brazuca was also used at a selection of international football matches, albeit with a different design, including a friendly between Sweden and Argentina last February.

The Brazuca’s colours and ribbon design of the ball panels symbolise the traditional multi-coloured wish bracelets worn in the country, in addition to reflecting the vibrancy and fun associated with football in the South American country.

So last night I was born, achieved sentience, joined Twitter and had a party held in my honour in Rio. This. Is. The. Life #ballin

It has a new structural innovation, with a unique symmetry of six identical panels alongside a different surface structure will provide improved grip, touch, stability and aerodynamics on the pitch.