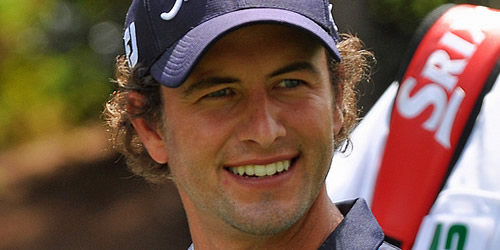 Adam Scott has pipped Tiger Woods to the Golf Writers Association of America Player of the Year award but later revealed that he’ll be taking an extended break from the game following next week’s Sony Open.

The Masters champion, whose currently ranked second in the world, prospered during the second-half of last year as he defeated Angel Carbera in a play-off at Augusta to claim his first major before conquering a star-studded field to win the Barclays Championship in August.

He finished the year with a series of victories Down Under where he won the Australian PGA and the Australian Masters before lifting the World Cup of Golf with compatriot Jason Day.

Scott returns to the fairways this weekend at the Hyundai Tournament of Champions in Hawaii and is a confirmed participant in the Sony Open at the Waialae Country Club but will then take a six-week sabbatical.

The 33-year-old did something similar 12 months ago when he opted to prolong his time away from the course after the festive break before returning in late February.

It was a strategy which obviously paid dividends as he jumped five places in the rankings and enjoyed his best season to date which culminated in the prestigious GWAA award.

“It is an honor to be recognised as the most consistent male golfer of 2013 and it is appreciated to have the respect of the Golf Writers of America. Thank you,” Scott said.

He is expected to return in time for the Honda Classic, which takes place in Florida, at the back end of February but will miss the World Match Play Championship.

It will be the first time he has missed the event in Arizona since he became eligible back in 2002 and is a blow for the tournament organisers given his popularity, current world ranking and ability to attract interest in Oceania.

Meanwhile, Ernie Els has also announced he’ll miss the first two events of the European Tour season for personal reasons after revealing the touring scheduling is becoming “tougher and tougher”.

The South African will miss the Volvo Golf Champions in Durban and then the lucrative Abu Dhabi HSBC Golf Championship a week later.

“I am really sorry to miss the Volvo Golf Champions and the Abu Dhabi HSBC Golf Championship but for personal reasons I have decided to remain at home with my family and play my first event once my children return to school,” Els said.

“I apologise for the inconvenience and late notice of the decision but wish Volvo and HSBC the best of luck with their Tournaments and look forward to playing in South Africa again soon.”

The 2014 PGA Tour season recommences this weekend with the Hyundai Tournament of Champions where only thirty of last year’s winners are involved before next week sees the European Tour’s first event of the New Year in Durban.

Ashes 2013-14: England have plenty to play for, insists Ben Stokes